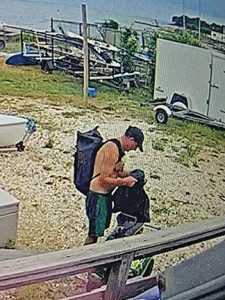 Fairhaven Police are looking for this man, who is a person of interest in the theft of a sailboat from Community Boat of New Bedford that washed ashore on Fairhaven Town Beach. Photo submitted by Fairhaven Police.

Lt. Kevin Kobza reports that the Fairhaven Police Department is looking to identify a person of interest in a reported boat theft.

Police were initially engaged in a water search for what they believed  was a missing boater.

They later received information that the boat had been reported stolen, and police are now seeking a person of interest who had been aboard the boat. That person was subsequently seen in surveillance footage in Fairhaven and the missing boater search was called off around 1:30 p.m.

At approximately 6:45 a.m. Monday, a sailboat was discovered washed ashore unoccupied on the south side of the West Island Town Beach. The 24-foot sailboat  was later reported stolen from Community Boat in New Bedford, and is believed to have been stolen Sunday night around 8 p.m.

Investigators are seeking to identify and speak to a person of interest seen in surveillance footage obtained by police.

When it was believed there was a missing boater, land and sea assets were utilized in a search of the immediate area, including the Fair­haven, New Bedford and Mattapoisett Police Departments, and the U.S. Coast Guard with help from the Fairhaven Harbormaster and Fair­haven Fire Depart­ment, the SEMLEC Search & Rescue Team and the Mattapoisett and Marion Harbormasters. The search was called off on Monday afternoon after police gathered more information in their investigation about the person of interest.

“We are seeking a person of interest who not only may have stolen a sailboat and ran it aground, but who in doing so caused a massive response of police, fire and maritime resources,” Lt. Kobza said.

A photo of the boat and person of interest are provided. Anyone who may be able to identify the person or provide any additional information is urged to contact Fairhaven Police at 508-997-7421.