The Friends of the Millicent Library and the New England First Amendment Coalition sponsored free pael discussion on Wednesday evening, May 23, in the library’s Community Auditorium: “The First Amendment, Freedom of the Press, and the Right to Read.” 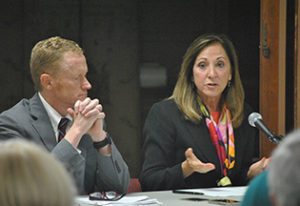 Ed Fitzpatrick and Karen Bordeleau of the New England First Amendment Coalition speak on a panel at an event sponsored by NEFAC and the Friends of Millicent Library on 5/23/18 in Fairhaven. Photo courtesy of Justin Silverman

Some of the topics discussed were what the First Amendment is and isn’t; the meaning of “fake news”; how we can become better-informed consumers of news; the limits on freedom of speech and the press; and the history of press freedom.

At the end of the session, the panel was asked to rate the threat to First Amendment from 1 (nothing to worry about) to 10 (time to lose sleep), and their ratings averaged out to about 10.5.

The discussion followed the annual meeting of the Friends of the Millicent Library, at which officers and board members for 2018 to 2020 were elected. 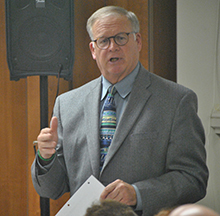 Gregory Sullivan of the New England First Amendment Coalition speaks at an event sponsored by NEFAC and the Friends of Millicent Library on 5/23/18 in Fairhaven. Photo courtesy of Justin Silverman

NEFAC was formed in 2006 to advance and protect the Five Freedoms of the First Amendment, including the principle of the public’s right to know. We’re a broad-based organization of people who believe in the power of an informed democratic society. Our members include lawyers, journalists, historians, academics and private citizens.

The coalition is funded through contributions made by those who value the First Amendment and who strive to keep government accountable.