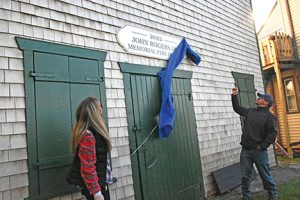 L-R: Alison and Alexander Kuecher, the grandchildren of John Roger Jr., unveil the sign designating the Spring Street Fire Station in Fairhaven after their grandfather on Saturday, 11/19/22. Photo by Beth David.

The Fairhaven Historical Commis­sion, town officials, and fire depart­ment personnel welcomed the family of John Rogers, Jr. to an unveiling of a sign renaming the Spring Street Fire Station the “John Rogers Jr., Memorial Fire House,” on a cold Saturday, 11/19/22.

Wayne Oliveira, chairperson of the Historical Commission and a retired Fairhaven firefighter/paramedic, said it was appropriate to name one of their “beloved buildings” after John.

The building is where the 1937 antique fire truck, that many see in parades, is housed and cared for. Mr. Rogers took care of all the old apparatus, sometimes using his own money to keep them running, said Mr. Oliveira. 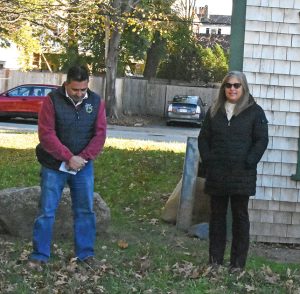 Mr. Oliveira said that when he started as a Call Firefighter, he would ride his bike to the scenes, and Mr. Rogers often picked him up and gave him a ride.

But it was the antique fire trucks that were Mr. Rogers’s passion. He kept them running, which took a lot of time and effort. Imagine trying to find a part for a 1937 Maxim fire truck, but he did.

Mr. Oliveira said he had fond memories of Mr. Rogers telling him how important it was to get younger people involved, and he worked to do that, bringing his grandson Alex along. Alex drives the old fire truck in his grandfather’s place now. Mr. Oliveira said when you heard the fire truck, you looked for John, now you look for Alex.

Select Board chairperson Stasia Powers also said a few words, saying the Rogers family is “very dear” to her, so she was happy to be part of the ceremony.

And, she agreed: “You hear that truck, you’re looking for Mr. Rogers,” she said.

“John did it with love,” said Ms. Powers.

“My dad loved all of this, all of you,” said Pam Kuechler. “We really appreciate it.

I feel very proud of him,” said Peggy. “He was always with the Fire Department. Sometimes he was gone more than I wanted him to be, but he loved it.” 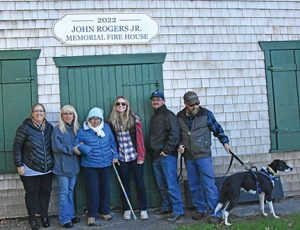 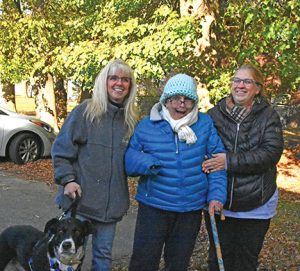 L-R: The Rogers family, Jasmine, Pam Kuechler, Peggy Rogers, and Martha Rogers are all smiles (yes, even Jasmine), after the unveiling of the sign renaming the Spring Street Fire station the “John Rogers Jr. Memorial Fire House” after Peggy’s husband and Pam and Martha’s father, on Saturday, 11/19/22. Photo by Beth David.