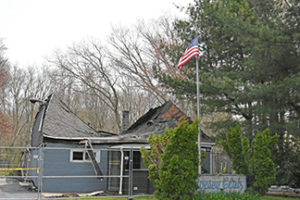 The roof of tye Thomas Livesely Memorial Club bulding is caved in after affire on Sunday, 5/6/18. Photo by Beth David.

An early morning fire completely destroyed the Thomas Livesey Memorial Club building at 11 Hopkins Street in North Fairhaven on Sunday, 5/6. Neighbors called 911 at 3:54 a.m. after noticing flames at the back of the building. When firefighters arrived, they found heavy flames coming from the back of the building. The fire quickly spread to the roof and engulfed the structure, according to a press release by the Fairhaven Fire Department.

No injuries were reported and no members were in the club at the time of the fire. The building is a total loss.

According to club president John Roderiques, the cause is believed to be electrical that started in the ceiling.

Established in 1949, the athletic club has played a large role in local sports for 68 years. Programs support a variety of athletic teams, including football and cheerleading, and issued awards and scholarships.

The all-male club was a daily gathering place for retired mem­bers who played cards, hung around socializ­ing, and other­wise stayed out of their wives’ hair, said a few mem­bers gathered the day after the fire. A few of the guys met there every day at around 8 a.m. and stayed most of the morning.

“The biggest problem is some of the wives are concerned that some of us old farts have nowhere to go now,” said club Director David Darmofal, trying to inject some levity into the conversation, but also stating fact.

Charlie Souza said he has been a member for 30 years. He does not play pitch himself, but went every morning to “socialize,” drink his coffee and watch the other guys play.

Dennis Arsenault is not yet retired, so he was not a daily visitor. A member since 1991, he said he played Pee Wee Football with the club. 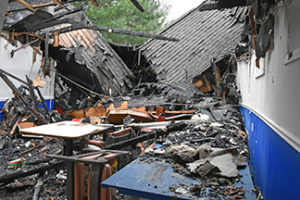 The main room of the Thomas Livesey Memorial Club on Hopkins Street in North Fairhaven is in shambles after the roof collapsed from a fire that destroyed the building on Sunday, 5/6/18. Photo by Beth David.

Steve Perry, the club’s financial secretary, said he loved watching the morning group play cards. They’ve known each other for years and it showed.

“They have so much fun,” said Mr. Perry. “They go back and forth, they pick on each other. It’s so funny.”

“Our intent is to rebuild,” said Mr. Darmofal, adding that the club has been a tradition for the kids in a lot of ways for too long to let it go.

President John Roderiques echoed that sentiment. He said they will see how much money the club gets from the insurance company and go from there.

The bigger heartbreak, even bigger than the loss of the building, is the destruction of so many trophies, photographs, plaques and mementos from decades of local sports.

Firefighters managed to pull out some of the items, said Mr. Darmofal, but it is unclear what is salvageable and what is destroyed.

“What didn’t get burned got massive water and smoke damage,” said Mr. Roderiques. “We’re hoping to save some of the pictures and trophies.”

He said the building is too unstable now for anyone to pick through what’s left.

“Whatever we can salvage, we’re going to salvage,” said Mr. Roderiques, addiing that he had little hope, however, for the original charter document that was hanging on the wall.

A couple of organizations have offered a place for the club to hold meetings, but that doesn’t help the morning guys, said Mr. Roderiques.

“That’s what they do every day, from eight-a.m. to noon, seven days a week, those guys are hanging out,” he said. “I don’t know what they’ll do now. I feel bad for them.”

A neighbor, however, has offered her garage.

“It was really nice to hear the neighbors [on news coverage] talk about the club,” said Mr. Darmofal, because they had only good things to say. “It’s just a bunch of guys who get together. There’s never any trouble.”

Not only the members will miss the club, though.

Kendra Tetreault, whose future father-in-law is a member, had her baby shower there. Her future husband recently joined.

To help the Livesey Club get back on its feet, you may donate at https://www.gofundme.com/thomas-memorial-livesey-club