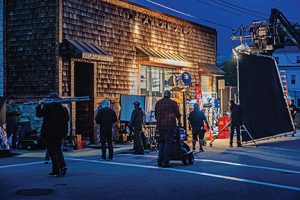 The crew of the movie “Finestkind” is set up to shoot outside of Rasputin’s on Main Street in Fairhaven on 5/16/22. Photo by James Mahaney.

It’s no secret that the movie “Finestkind” has been filming in Fairhaven and New Bedford for weeks now. They seem to be on schedule, and that means they should be wrapping up this week in Fairhaven. They will still be in the area, though, with plans to close the Fairhaven-New Bedford swing bridge for filming on Saturday, 6/4.

The movie about two brothers (Ben Foster, Toby Wallace) who reunite as adults and work on a fishing boat out of New Bedford. Desperate circumstances force them to strike a deal with a Boston crime syndicate. A woman (Jenna Ortega) is caught in the middle. Tommy Lee Jones plays their father.

The movie was written by Academy Award winning writer Brian Helgeland, who is from Dartmouth and worked on a fishing boat in New Bedford when he was younger.

The project has been a passion of his for 20 years.

It will be released on Paramount+

Residents have been getting a serious kick out of seeing the famous faces in town.

Barbara Despres, 89, got quite a thrill when she got to meet Tommy Lee Jones, who was filming in her neigh­bor­hood. Ms. Despres said she is a big fan so she wanted to meet him. The chance came when his truck stopped right near her house.

Encouraged by her neighbors, she got a little closer and said, “I love your movies,” Ms. Despres told the Neighb News this weekend at a chance meeting at Huttleston Marketplace.

Chris Wesoly pulled out a cell phone and taped the exchange, which is available on FUN 107.

“I hope Fairhaven has been welcoming for you.”

“It certainly has,” he replied.

Ms. Despres said she does not know the “young guys,” but has been a Tommy Lee Jones fan for years.

Ms. Despres has a bit of celebrity of her own going on. She was a crossing guard for years at schools in Fairhaven, so everyone pretty much knows her. She also publishes poetry and paints.

“He should be bragging that he met her,” said Tori Tepe. 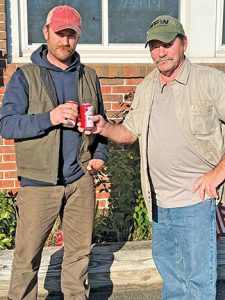 Commander Jeff Cardoza (RIGHT), has a beer with movie star Ben Foster on 5/17/22 outside the Fairhaven VFW, close to where Mr. Foster was filming for “Finestkind,” a movie about two brothers fishing out of New Bedford. Photo courtesy of Jeff Cardoza.

Meanwhile, on a different day in a different part of town, Jeff Cardoza, Commander at the VFW in Fairhaven, had his generosity repaid with a beer, courtesy of Ben Foster, one of the movie’s stars.

Mr. Cardoza allowed the crew to park a truck on the premises as the were filming at Moriarty’s.

Next thing he knew, Ben Foster was walking over with a six-pack of Budweiser. Mr. Foster said he appreciate veterans and just wanted to share a brew with Mr. Cardoza.

The Facetimed Mr. Cardoza’s son, Jeffrey Jr., talked about his son Aiden who is a left-handed pitcher at Bishop Stang that the scouts are looking at.

They had a real conversation about kids and sports, movies and more, said Mr. Cardoza.

He even did a little video pitching Mr. Cardoza’s contracting business, “Fynal Touch.”

Mr. Foster autographed one of the beer cans and Mr. Cardoza’s baseball cap. 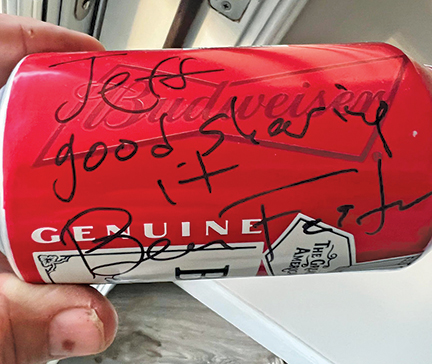 Movie star Ben Foster signed the can of beer he had with Jeff Cardoza, commander of the Fairhaven VFW, on 5/17/22, while Mr. Foster was filming nearby for “Finestkind,” a movie about two brothers fishing out of New Bedford. Photo courtesy of Jeff Cardoza. 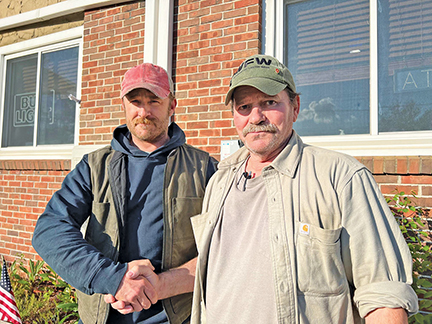 Movie star Ben Foster (LEFT) shakes hands with commander Jeff Cardoza on 5/17/22 outside the Fairhaven VFW, close to where Mr. Foster was filming for “Finestkind,” a movie about two brothers fishing out of New Bedford. Photo courtesy of Jeff Cardoza. 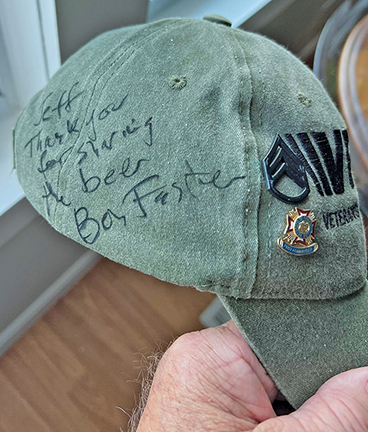 Movie star Ben Foster signed the baseball cap commander Jeff Cardoza was wearing while they had a beer together at the Fairhaven VFW on 5/17/22, while Mr. Foster was filming nearby for “Finestkind,” a movie about two brothers fishing out of New Bedford. Photo courtesy of Jeff Cardoza.