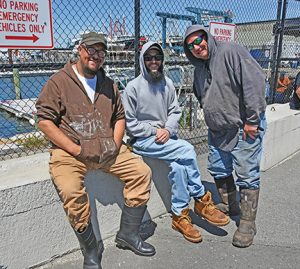 L-R: Brandon Estrella, Tom Sinko, and Mike King pose for the local free sheet after working as extras on the movie FinestKind filming on Union Wharf in Fairhaven on 5/25/22. Photo by Beth David.

The movie “FinestKind” filmed in Fairhaven last week, bringing lots of commotion to Union Wharf and Fort Phoenix on Wednesday, 5/25. Tommy Lee Jones, the biggest name in the cast, was on set, giving locals a bit of a thrill to catch glimpses of the famous star, who is, apparently a bit camera shy with the public.

One of the scenes on Union Wharf had Mr. Jones driving an old El Camino off the wharf onto Union Street. Later that day, he was at Fort Phoenix, watching the fishing vessel, “FinestKind” head out to sea.

The boat is actually the Sandra-Jane, temporarily renamed for the movie.

At Union Wharf, three friends walked off the set dressed like they work on a fishing boat.

Local men Brandon Estrella, Tom Sinko, and Mike King were extras on the set, joking that mostly, it was their backsides that got filmed. 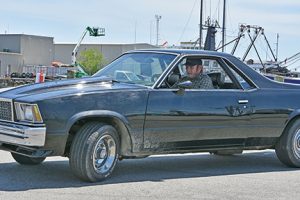 Actor Tommy Lee Jones drives an El Camino off Union Wharf during a scene of “FinestKind” on 5/25/22, a movie revolving around two brothers fishing out of New Bedford Harbor, and written by Academy Award winning writer Brian Helgeland who grew up in New Bedford. Photo by Beth David.

They did get paid, though.

All around, locals had their cell phones and other cameras out to try and catch a shot of one of the movie’s stars. Most of the actors were accommodating, but the elusive Mr. Jones stayed away from the rabble.

Plans are to close the Fairhaven-New Bedford swing bridge for filming on Saturday, 6/4, when rumor has it that Mr. Jones’s character will be arrested on the bridge.

The movie is about two brothers (Ben Foster, Toby Wallace) who reunite as adults and work on a fishing boat out of New Bedford. Desperate circumstances force them to strike a deal with a Boston crime syndicate. A woman (Jenna Ortega) is caught in the middle. Tommy Lee Jones plays their father.

The movie was written by Academy Award winning writer Brian Helgeland, who is from New Bedford and worked on a fishing boat in New Bedford when he was younger. 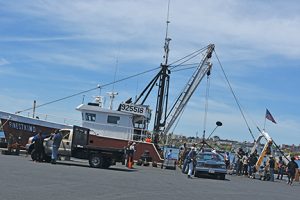 Union Wharf in Fairhaven is the set for a scene of “FinestKind,” a movie written by Academy Award winning writer Brian Helgeland who grew up in New Bedford, filming on 5/25/22. Photo by Beth David.

The project has been a passion of his for 20 years.

It will be released on Paramount+ 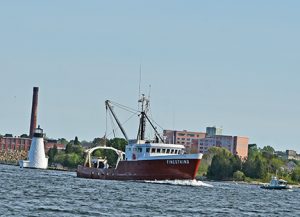 The F/V Sandra-Jane, temporarily named “FinestKind” as a star in the movie of the same name, passes by the Palmer Island Lighthouse on its way back to the New Bedford side of the harbor after filming at Fort Phoenix on 5/25/22. Photo by Beth David.