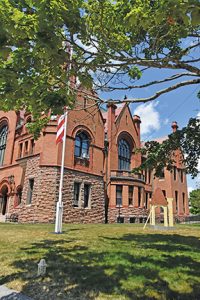 A life-sized facsimile of the housing for the Revere bell, that was removed from the Oxford School, sits on the Fairhaven Town Hall lawn on 7/9/22, in the spot chosen by members of the historical commission and the bell committee as a permanent place for the bell. Photo by Beth David.

Members of the Historical Commis­sion, Bell Committee, Select Board,  and members of the public, met at Fairhaven Town Hall on Saturday, 7/9, to pick a spot for the bell that had been housed in the cupola on the roof of the Oxford School Building. The bell was removed by volunteers and has been cleaned up and is ready for its new home. The school building has been and repurposed for senior housing.

The SB has decided that the bell can be permanently placed on the lawn of town hall.

The group on Saturday used a light­weight facsimile of the new housing for the bell to move around the lawn to get a view of how it would look.

Wayne Oliveira, chairperson of the Fairhaven Historical Commission, said they were trying to find a spot that would be easily seen by people driving by. The base will be concrete for the 750+ pound bell, with a granite slab on as a decorative feature. Mr. Oliveira said they will eventually install a walkway to it as well.

The bell was cleaned by a professional in Watertown, but is back in Fairhaven now in a secure place. It will be secured in its new location to prevent it from being stolen.

The bell was crafted in the foundry owned by famous Boston patriot Paul Revere in 1796. It was commissioned for the Second Church of Christ, which eventually became the First Congregational Church in Fairhaven, but the bell was actually in the building that now houses Euro’s. 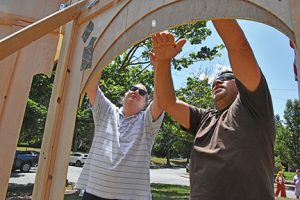 L-R: Bell Committee chairperson Doug Brady and Historical Commission chairperson Wayne Oliveira estimate how the opening will change a bit from the facsimile of the housing for the Revere bell on Saturday, 7/9/22, in anticipation of the bell being placed on the lawn of the Fairhaven Town Hall. Photo by Beth David.

The bell has had a storied history, that includes signalling the call to church, summoning children to school, and calling out alarms for the fire department.

Bell Committee member Lee Baumgartner said the committee has a lot of documents on the bell’s creation, acquisition, and its journey through the years.

“I think we found a happy medium,” said Mr. Oliveira on Saturday.

“You can see it from every angle,” added Mr. Baumgartner.

The committee will be at a Select Board meeting soon to talk about placement of the bell. 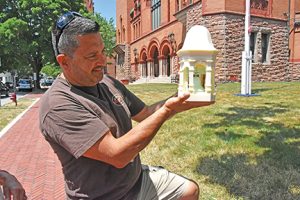 Fairhaven Historical Commission chairperson Wayne Oliveira holds up a miniature version of the housing for the Revere bell, that was removed form the Oxford School, while at town hall on 7/9/22 to find a place for the 226 year old bell on the lawn. Photo by Beth David.