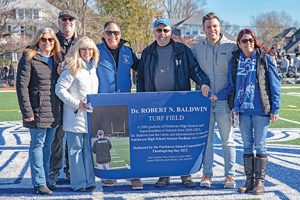 SC chairperson Pamela Kuechler told the crowd that when she first got elected to the SC 15 years ago, she realized the district was moving in a positive direction. She said Dr. Bald­win made it clear the children of the community “deserve the every best.”

With every step the children and what they deserve was at the center of what was done. So  it was no surprise that, after many years of talking about it, the answer to “what’s next?” was creating a beautiful stadium for all sports to use.

“We could not think of anything more fitting than to dedicate this turf field,” to Dr. Baldwin, said Ms. Kuechler.

The photo of Dr. Baldwin shows him facing out, with his back to the camera, “always looking forward” said Ms., Kuechler. “He gave the very vest to our town’s greatest asset, our children.”

He thanked Dartmouth for hiring him, noting he was on the Dartmouth sideline when he started his career.

“I love this tradition,” he said of Fairhaven playing Dartmouth on Thanksgiving Day. “You are a class act.”

He thanked everyone who gave him a chance, people in town who pushed the school department to be better and to be accountable. 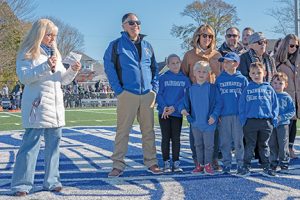 School Committee chairperson Pam Kuechler (LEFT) speaks about dedicating the Fairhaven High School turf field to former Superintendent of Schools Dr. Robert Baldwin, who is surrounded by his family during halftime of the Thanksgiving Day football game on 11/24/22. Photo by Glenn C. Silva for the Fairhaven Neighborhood News.

He also pointed out his mother, calling her the “strongest, kindest person ever put on this earth.”

“And for the people who are cynical and critical in the world, spend a half an hour with my mom and it will turn your whole world around,” said Dr. Baldwin, also not forgetting his wife and children, saying they were “blessed.”

“Just keep being good people because it works,” said Dr. Baldwin, surrounded by his children and grandchildren.

“What the heck is a class of 1980 graduate doing out here today? I don’t know,” said Dr. Baldwin. “All I can say is ‘thank you’ to this community that I love so much. And I hope our kids for years on enjoy this beautiful facility.”

The sign is on the northern corner of the field.