The Boston Bruins’ Torey Krug signed puck was part of the 2019 Millicent Library’s Summer Program. The puck is one of a series of prizes that the Boston Bruins offered during its When You Read, You Score program. The summer of 2019 marks the tenth anniversary of the program and the team’s partnership with Massachusetts Board of Library Commissioners (MBLC), and the Massachusetts Library System to encourage children and teens to read over the summer months.

This year’s winner was Gabrielle Heroux, 17, a senior at Fairhaven High School and a dedicated member of the library’s Teen Group. 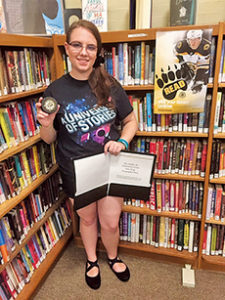 Gabrielle Heroux, 17, a senior at Fairhaven High School, shows off the Bruins puck, and its certificate of authenticity, that she won in the Millicent Library’s 2019 summer reading program. Submitted photo.

“The kids really enjoy picking up a book and seeing that it was recommended by one of the Bruins players. It inspires them to want to read it themselves,” said Jane Murphy, Youth Services Librarian at the Millicent Library.

The statewide summer library program is made free to all public libraries and residents in the Commonwealth thanks to support from the Institute of Museum and Library Services (IMLS), the Massa­chu­setts Board of Library Commis­sioners, the Massachusetts Library System, and the Boston Bruins. This year’s statewide theme was “A Universe of Stories.”