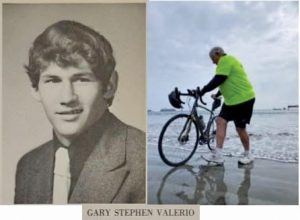 Gary Valerio, a 1972 graduate of Fairhaven High School, dips the wheel of his bicycle in the Pacific Ocean in California, where he starrted his cross country trip. When he reaches Fairhaven, he will dip the wheel in the Atlantic Ocean in Fairhaven. Submittted photo via the Fairhaven Alumni Association.

Gary Valerio ’72 is heading to his 50 Year reunion in Fairhaven by an unusual method and route. Gary lives in Palmetto, FL with his fiancé Darla Donovan, but on April 1, 2022 he dipped his bicycle wheel (see photo) in the Pacific Ocean at his son Mark’s home in Long Beach, CA, and he and Darla then embarked on a 3,000 mile bike ride across the United States.  They plan to arrive in Fairhaven sometime in the latter part of June and Gary will end his ride by dipping the wheel of his bike in the Atlantic Ocean at the West Island Town Beach.  Gary’s father Herb Valerio ’51 is sure to be there as well.

Gary and Darla are riding to raise awareness and money for the Cystic Fibrosis Foundation in honor of Gary’s sister Heidi’s 28 year old daughter, Libby Montigny, who is managing this awful disease.

As of May 1st Gary and Darla had reached central Kansas and had raised 10% of their goal of $100,000. Darla began the ride with Gary, but is now in a support role.

Gary and Darla’s progress can be tracked on this biking blog: https://www.crazyguyonabike.com/directory/?o=3d2&user=garyvalerio&v=6

You can also check out Gary Valerio on his Facebook page as well. 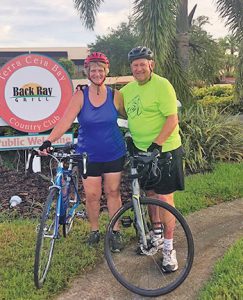