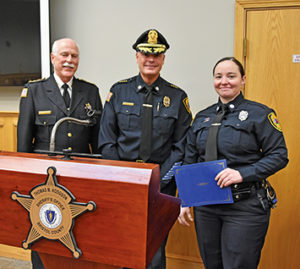 The dogs weren’t there (to the deep disappointment of this reporter), but plenty of human brass and supporters showed up to celebrate the graduation of two dogs from the Bristol County Sheriff’s Office Basic K-9 Narcotics Detection Academy last Friday, 12/3/21. The graduates included the members of Fairhaven’s brand new K9 unit: K9 Blue and his handler, Officer Jillian Jodoin; and BCSO’s K9 Robika and handler Officer Filipe DaSilva.

The 10-week academy trained the dogs to search for and detect narcotics, and taught the officers to be handlers. Officer Jodoin will go back to patrol, but she and Blue will con­tinue training monthly with the BCSO.

Fairhaven Police Chief Michael Myers and Capt. Michael Botelho said that Blue will be trained in one more specialty, and will also be a comfort dog. They said they would like him to be trained to track, to look for people who are missing.

Chief Myers said having a narcotics detection dog is a “great asset.” The K9 can alert police if someone is concealing illegal drugs. He said the alert from the dog gives police probable cause to search someone or get a search warrant.

He will also be used at the schools to sniff lockers, a practice that has become routine in public schools.

Blue will also be a comfort dog, to help in the schools and police officers after traumatic events. He has already been to long term care facili­ties and other housing complexes, said the chief. 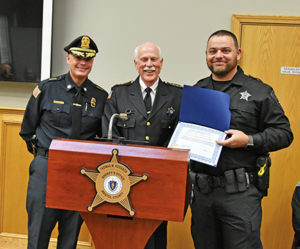 Chief Myers said that the depart­ment has been called on more often to help find people with special needs.

Sheriff Thomas Hodgson told the crowd that it was a “big event.”

He also said that law enforcement is unfairly judged in the current political climate.

After the ceremony, Sheriff Hodgson said that the BCSO academies are at no charge to local communities. Not only do they save for the cost of the academy, but they save travel costs and time by not having to go to Boston.

“What’s important is the partner­ship,” said Sheriff Hodgson. “If we learned anything post 911 it’s that we need to strengthen our partnerships.”

He said sharing resources saves the taxpayers money and increases standard operating procedures “all the way around.”

Chief Myers said Capt. Botelho was the driving force behind creating a K9 unit in Fairhaven. The BCSO made it possible, because going to Boston was not feasible. He said BCSO was right with them every step of the way no matter how many times they needed to call. 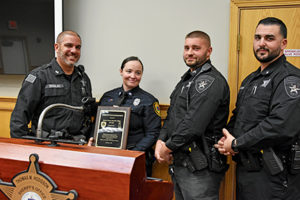 “We’re excited about this,” said Chief Myers. “I think the town of Fairhaven is excited. Officer Jodoin is excited. And every time I see Blue, he’s excited.”

He said the unit is a great asset to the town of Fairhaven and appreci­ated every­body’s support.

“I couldn’t ask for a better depart­ment,” said Officer Jodoin, adding it was not only a special moment for her, but for the depart­ment, and that it was truly an honor.

She said it was a lot of work, but she had the BCSO in her corner, and the instructors on “speed dial” to answer any questions she had. They let her know they were “personally invested” in her, she said.

Officer Jodoin also recognized Brian’s Car Care, that outfitted the K9 cruiser. She presented a plaque to Eric Brasil of Pet Supplies in Fairhaven, who has pledged to give Blue all his food at no charge to the town; and a plaque to the BCSO’s K9 Unit for their “vested interest in the foundation of the Fairhaven Police Department K9 Division and the success of Fairhaven Police Officer Jillian Jodoin and K9 Blue.” 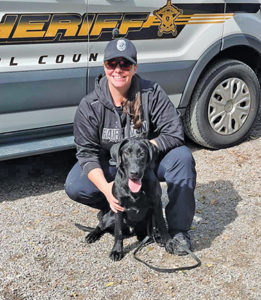 “It’s a tough job. It’s not easy. But when the bell rings, every single K9 officer answers,” he said, adding that it is usually at 2 a.m. and “nothing good happens at 2 a.m.”

“Thank you for trusting us,” said Sgt. William Dillingham of the BCSO to Fairhaven. “She did a great job, was willing to learn, and was 100 percent into it.”

After the ceremony Officer Jodoin said she was “elated.”

So far, she has only observed at school searches, and has partici­pated in train­ing searches.

She will go back to regular patrols and will have Blue with her.

And she’ll be ready when they call her and Blue out, whenever that is. 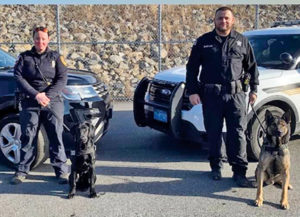