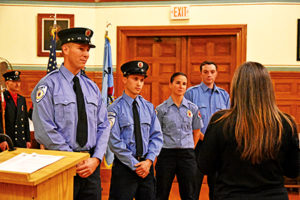 L-R: Just-about-to-be-hired full time Fairhaven firefighters Todd Sexton and Spencer Espinola; and on-call firefighters Heather Lopes and Matthew Foster listen as Acting Town Clerk Linda Fredette reads the oath they must agree to in order to be hired during the Selectboard meeting on 11/8/21. Photo by Beth David.

Fairhaven welcomed two full time firefighters and two call fire­fighters to the ranks on Monday, 11/8/21, with the official swearing in during the Select Board meeting. The Depart­ment also promoted Chauncey Burr to Lieutenant.

The department has seen “historic numbers in run volumes,” in the past year, said Chief Correia, so it is “important and imperative” to find and hire the best qualified candidates.

He introduced Chauncey Burr, saying he joined the department in 1993 as a call firefighter, and went full time in 1995, the same time as Chief Correia.

“He doesn’t always see eye to eye with me,” said Chief Correia, adding it was “advantageous” to him because it helped him see different sides and opinions.

He said Mr. Burr has “vast experience and a lot of knowledge behind him,” is an excellent paramedic and a born leader. 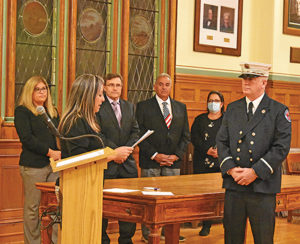 Acting Town Clerk Linda Fredette swore in Lt. Burr, and then his father pinned on his new badge.

Lt. Burr thanked his dad for not stabbing him in the chest, and noted his father was a call firefighter in Fairhaven.

Lt. Burr also thanked his wife, saying “without her direction, this wouldn’t happen.”

Mr. Sexton is a firefighter in Carver and has a background in construc­tion. He will attend the fire academy in December of this year and paramedic school in March, 2022. He was sworn in as a full time firefighter.

Spencer Espinola was also sworn in as a full time firefighter. He works in the New Bedford fire department and for Brewster EMS. He will attend the fire academy in March of 2022.

Ms. Lopes is the daughter of retired police officer Tony Lopes; Mr. Foster is the nephew of Sgt. Foster of the police department. 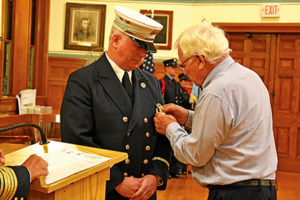 Chauncey Burr’s father pins his son’s badge to his uniform after he is sworn in as a lieutenant in the Fairhaven Fire Department during the Select Board meeting on 11/8/21. Photo by Beth David.