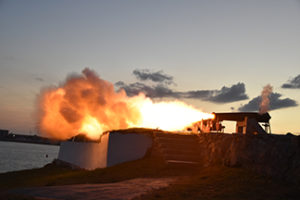 A plume of fire and smoke fills the air when cannon #1 fires at the annual fall encampment at Fort Phoenix in Fairhaven on Saturday, 9/29/18. Photo by Beth David.

The Fairhaven Village Militia is always looking for new members. Learn all about life in the 1700s, join members at encampments and re-enactments all over the region.

Learn to fire flintlock weapons, cook over an open fire, tinsmithing, children’s games of the period and so much more.

Founded in 1999, the FVM is a group of historical reenactors including men, women and children who portray 18th Century life at Fort Phoenix in Fairhaven, Mass., and in the surrounding area.

Since its establishment, the group has provided fun, educational, family friendly programs and historical encampments at Fort Phoenix as well as in local schools and neighboring communities. The FVM also partici­pates each year in parades and ceremonies on Memorial Day, the Fourth of July and Veterans Day in addition to taking part in other special events.

Members of the group are profi­cient in demonstrating Revolutionary War period activities including military drilling, musket firing, camp cooking, spinning and weaving, fire starting, musket ball casting, wood working, tomahawk throwing, and 18th century medical and dentistry procedures. It’s not unusual to hear the music of a tin whistle or see a period magic trick. There are always old-fashioned toys and games in camp for children to try out.

Several members of the militia are licensed by the Massachusetts Fire Marshall’s Office to fire cannons. The group fires the large seacoast defense guns at Fort Phoenix at least three times a year. The Fairhaven Village Militia owns its own small field artillery cannon, which is fired at special events.

Membership is $10/year, $25 for families. To learn more visit https://fairhavenvillagemilitia.blogspot.com, find them on Facebook, or contact Commander Ellsworth “Ellie” Sylvaria Jr., 508-441-7566, or madeinu@aol.com.