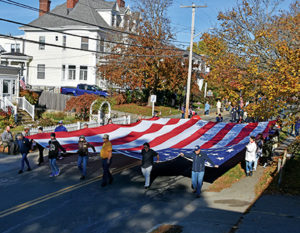 Members of the Lions Club, veterans, and other volunteers carry the 30×50-foot flag down Main Street during the Fairhaven Veterans Day parade on 11/11/21. Photo by Beth David.

Organizers, veterans, parade watchers, and all comers expressed gratitude for being able to hold the Veterans Day parade last week in Fairhaven, after last year’s parade was canceled due to the pandemic.

“I know that everyone behind me has been happy to march and come out today, especially on such a beautiful day,” said Mr. Brownell.

He said this year is special because it marks the 100th anniversary of the Tomb of the Unknown Soldier. Through all wars since 1921, a soldier has been added to represent each war. The Vietnam solder was eventually identi­fied through DNA.

If you were born after 1948, said Mr. Brownell, a sentinel has been guarding the tomb evey second of every day of your life.

Deven Robitaille, Commander of VFW Tuttle Post 7239 in Acushnet told the crowd that she has organized  the essay contest for students, but never wrote one herself, so this year she did. The topic for middle school students was “How do I be a good American?” 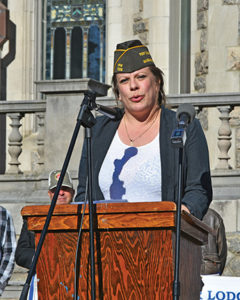 Deven Robitaille, Commander of VFW Tuttle Post 7239 in Acushnet, addresses the crowd at a ceremony after the Fairhaven Veterans Day Parade on 11/11/21, at Fairhaven High School. Photo by Beth David

Cmdr. Robitaille said that first it means to show up.

“We need to become civically engaged, pick up litter, go to city or town hall meetings, interact with your elected leaders,” she said, and hold them and yourself accountable.

Vote, she said, and noted the struggles women had to go through to get the right to vote.

Speak out against injustice and celebrate each other’s accomplish­ments, said Cmdr. Robitaille.

“In order to preserve the American Dream and be good Americans, we as a general public must show up and be heard,” she said.

High school students were asked “Where do we go from here?”

“I say UP,” said Cmdr. Robitaille.

“Take care of each other, and be kind,” said Cmdr. Robitaille. “Kind­ness is free. Free to give and free to receive, so start spreading it because the world needs more of it.”

She also urged the public to support veterans, noting that the VFWs and American Legions have lost about 100,000 members a year for the last 10 years. Veterans are one percent of the population that toed the line and “selflessly devoted themselves to our freedom.” 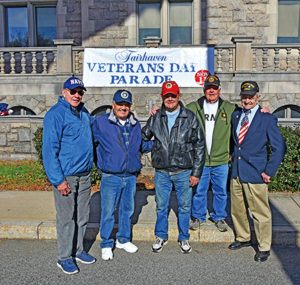 “If it wasn’t for them, we couldn’t be us,” she said. “Engage them, sup­port them and thank them. Let’s go up together as one united country.”

The ceremony also included Fairhaven Veterans Agent Brad Fish reading the proclamation from the governor for this year’s veterans day, the National Anthem, taps, and an invocation by Senior Chief Larry Jones.

The public was invited to a free brunch at the VFW on Middle Street after the ceremony.

Along the route, which started at Benoit Square and ended at the high school, people of all ages watched as the parade marched by. A couple of hundred people joined the ceremony at the high school, which included the raising of the “Big Flag,” the 30×50 foot flag commissioned by the Fairhaven Alumni Association.

Dan Morris, a Marine veteran, said he was there to show support for veterans as he waited for his young grandson to arrive. Mr. Morris said he marched in his share of parades in the past.

Siblings Daniel, Quinn, Noah and Blake, ages two to five years old, were excited to see the parade. Only Daniel, the eldest, had an “inkling” of what Veterans Day and the parade actually mean, said his mother Meghan. Daniel is just starting to learn about Veterans Day in school, and about all the people who keep us safe.

Daniel simply said he was there “to see the parade.”

A video of the event is available on demand on the Fairhaven Community Media website at FairhavenTV.com 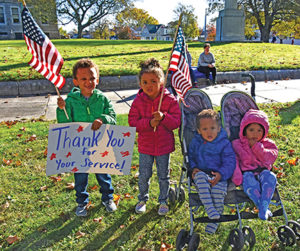 Siblings Daniel, Quinn, Noah and Blake show their support for veterans as they wait for the parade to reach their spot near Fairhaven High School on Veterans Day, 11/11/21. Photo by Beth David. 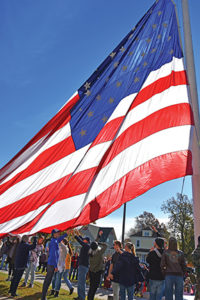