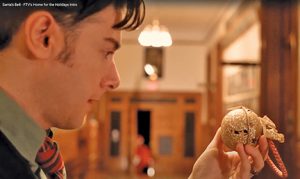 In this screen shot from the short film “Santa’s Bell,” produced by Fairhaven TV Cable Access, Magician Todd Migliacci looks in awe at a bell he finds as Santa slips away to the Banquet Room of Fairhaven Town Hall. The film won a Hometown Media Award from the Alliance for Community Media, in a national competition. Screen shot from Fairhaven TV YouTube channel.

Fairhaven TV received a 2022 Hometown Media Award from the Alliance for Community Media Founda­tion. The awards program was established to honor and promote community media, community radio, and local cable programs that are distributed on Public, Educational and Governmental (PEG) access cable television channels. Proceeds go to the ACM Foundation which is exclusively used for facilitating, preserving, and promoting education in community media.

Fairhaven TV won “Best Children’s Program” for a short film titled “Santa’s Bell.” This piece aired at the beginning of their 2021 Virtual Home for the Holidays Event. The video can be watched on Fairhaven TV’s YouTube Channel at https://youtu.be/OAcWjtK2JMg.

Cable Access Director Derek Frates says, “Based on our success winning MassAccess Creator Awards at the statewide level in consecutive years, we decided to enter the ACM awards to compete against the entire country.”

He added, “It’s an honor for our staff to be recognized on a nationwide level for our continued work and commitment to the commu­nity of Fairhaven.”

The team will receive their award in Chicago, IL at the 2022 ACM Annual Conference on June 29th.

Each year, nearly one thousand entries are submitted. These entries, or programs, are submitted and evaluated on several factors resulting in over 100 award winners. A panel of judges from the industry evaluates the entries. Awards are presented to the most creative programs that address community needs, develop diverse community involvement, challenge conventional commercial television formats, and move viewers to experience television in a different way.

“The Hometown Media Awards celebrate both the excellence of work and the diversity of media that appears on community channels being produced around the country. The ACM Foundation is proud of their achievement and of how they represent their communities in their work,” said Mike Wassenaar, president & CEO, Alliance for Community Media.

Founded in 1979, the Alliance for Community Media is a national, non-profit membership organization com­mitted to ensuring access to electronic media for all people. The Alliance for Community Media carries forth its mission by educating, advocating, and acting as a resource for the more than 3,000 Public, Educational and Governmental (PEG) cable channels nationwide.