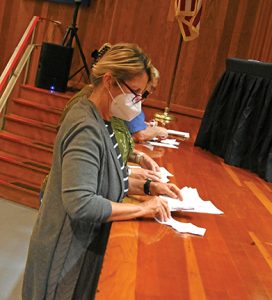 Designated counters count ballots for an article at Fairhaven Town Meeting on 6/18/22 that required a paper ballot by state law. Photo by Beth David.

Fairhaven Town Meeting members approved a $56+ million operating budget, $50 million in borrowing for Wastewater Treatment Plant up­grades, and $3,765,000 in capital equipment/projects spending at annual Town Meeting on Saturday, 6/18/22, held in person for the first time in two years at Hastings Middle School. The meeting started at 9 and ended just before 1:30 p.m. TM members also approved the next step in the town owning its internet/fiber optic service, and voted to make the Tree Warden an appointed position.

TM took up related articles 34 and 35 first because they required a paper ballot by state law. The “Municipal Light Plant” articles were required to pass for the second time for the town to possibly create its own internet infrastructure. Some of the language in the old statute was a bit confusing, but the upshot is that the town needed to authorize the creation of the infrastructure and the funding for it. Both articles passed, but not before some lengthy discussion.

This next phase will allow the town to build its own internet infrastruc­ture, which would then be available to different providers, Select Board member Bob Espindola told TM. He said people have long complained about Comcast’s prices and poor quality, but the town cannot attract any competition because Comcast owns all the infrastructure, such as cable lines, etc. If the town owns the lines, then the town can invite competition.

Mr. Espindola said there is an opportunity to get federal grant money for the project. 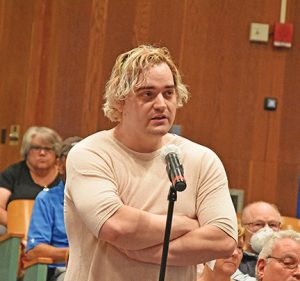 TM member Ann Ponichtera DeNardis expressed concern that creating  a “municipal light plant” would exclude residents from state programs like MassSave. She compared it to Hull and Braintree.

Town officials explained that Fairhaven would not be supplying electricity, residents would still use Eversource or whatever supplier they have.

A little back and forth between Ms. DeNardis and various town officials, also included concerns about how quickly technology has to be upgraded.

“My concern is this may be a fool’s bargain,” said Ms. DeNardis.

TM member Gary Lavalette pointed out that the system would be for internet only. Residents would still have to buy TV service and telephone, so the savings are not as big as they might think. He also noted that only a small fraction of US cities have gone this route.

Sean Powers, chair of the Broadband Committee said this would not take away Comcast.

“This is just about choice,” he said.

Terry Szala expressed concern about the word “betterment,” saying it would add to everyone’s tax bill.

Town Counsel Tom Crotty said the special legislation calls for only those who opt in to be charged the betterment fee.

In the end, both articles passed.

Community Preservation funds appropriations totalling $351,000 for specific projects were all approved, although not without discussion.

Some TM members did not want to spend $93,000 for sidewalk restora­tion around the Millicent Library, and there was some confusion as to which side of the streets would be done.

The project has been ongoing in phases. 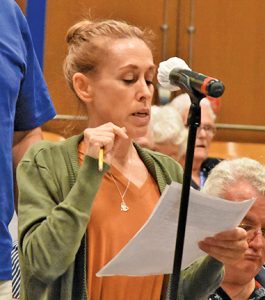 “I feel it is unnecessary,” said TM member Cathy Delano, adding the sidewalks can be repaired, and do not have to be replaced.

She said the money is better spent on other sidewalks that are impassable.

“It seems ludicrous to me and it’s dangerous,” she said.

Public Works superintendent Vinnie Furtado said the $93,000 is being added to another $90,000 that has already been appropriated, but was not enough for the project.

Finally, someone moved the question and the item passed.

There was also some discussion on spending $180K in CPC funds for pickleball courts at Livesey Park.

TM member Terry Szala said the town should find other ways to spend the money, with new pickleball courts at Fort Phoenix and a new private, for-profit pickleball court opening up soon. She said it would just compete with the new business.

“So what are we doing spending 180 thousand dollars on pickleball courts,” she asked. “There’s got to be something else to spend it on.”

Joanne St. Amand pointed out that pickleball is the fasted growing sport in the U.S. She said the courts will be used immediately.

“If you build it, they will come,” she said.

“There are so many different benefits to this community,” said Ken Pottel, president of the Fairhaven Pickleball Association. He said the courts fill up and they need more.

The benefits are both physical and social, he said.

In the end, TM approved the request. 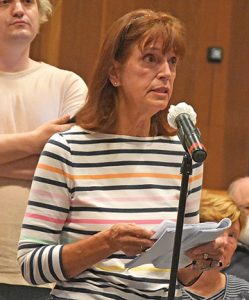 Town Meeting also approved changing the Tree Warden position from elected to appointed. Only tree warden Don Collasius spoke on the article, saying hew as against it last year, but is in favor of it now. He said the job should have a qualified person who goes through an interview process.

Article 32 also got some discussion, and would allow the chairperson of the Conservation Commission to issue fines.

“I don’t think elected officials or appointed officials should be issuing fines,” said Mr. Monroe. “That’s why we hire people who are educated and have the right certifications and are qualified for these positions.”

He said he was against giving any chairperson the right to issue fines.

Speaking for the ConCom, Karen Isherwood said the commission was trying to “be efficient.”

She said we do not have a conservation agent now and the police have other things to do other than issue fines. She said fines are not given out “willy nilly.”

TM member Susan Spooner spoke in favor of the change, saying fines should be higher than $300/day. She said for too long the town has “played fast and loose” with regulations.

The changes to the Wetlands bylaw also garnered some discussion, with some members wondering why the wetlands areas were being expanded.

Unfortunately, the way the warrant was printed, the changes were not marked, so there was some confusion as to what the changes were. A supplemental handout was given to TM members that morning, but some were not comfortable with the short time frame to look at changes.

Wayne Hayward, chairperson of the Planning Board and, arguably, the town’s top expert on the town code, said 99% of the bylaw was already in place.

Normally, he said TM is presented with just the changes, not the whole bylaw. He said it mostly changed some definitions to be in synch with other agencies, and they were “not a big deal.”

He started to go through the changes, but Town Moderator Mark Sylvia noted that the handout had the changes. 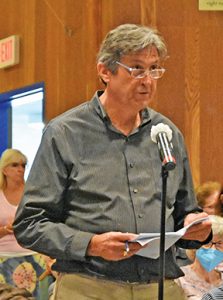 “I hope theirs is correct, because I know mine is,” said Mr. Hayward.

Eleanor Chew pointed out that the changes were “multiple changes” that they just received that morning.

“I’m not comfortable with that,” she said.

In the end the measure passed.

TM member Cathy Melanson asked for a recount, but only five members agreed to it, and it requires 10.

In other business Town Meeting:

• Approved $50,000,000 in borrowing for upgrades to the Wastewater Treatment Plant with no discussion.

• Approved a rezone of 114 Sconticut Neck Road, the former Jackson’s Variety, to mixed use, to allow a mix of business and residential on the property, which is how it was being used before a fire damaged the building.

A citizens petition for street light on Welcome Street passed.

As long as the number of ballots does not exceed the number in your section, we’ll know it’s okay [Town Moderator Mark Sylvia explaining the process for paper ballots]

I hope theirs is correct, because I know mine is [Wayne Hayward going over the changes in a bylaw that were not clearly marked on the original warrant]