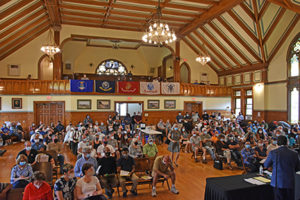 The auditorium at Fairhaven Town Hall is full during the town’s tax possession auction on 9/27/21. Photo by Beth David.

With a true auctioneer’s chant, the cajoling of a true salesperson, and even a tap dance to beg a few more dollars for a sale, Paul Zekos of Zekos Group squeezed $1,796,500 out of buyers that will go directly into the coffers of the town of Fairhaven.

The town held an auction for properties taken for nonpayment of taxes. The original 34 properties were pared down to 28, with the removed parcels to be transferred to the Conservation Commission for land preservation.

The town hall auditorium was filled to the brim, with non-bidders asked to go upstairs to the balcony to make room for the bidders, who needed to be on the main floor.

The two top-selling properties were no surprise, with the commer­cial property at 54 Main Street fetching $275,000. The building  was owned by the American Legion Post 166. It has four commercial storefronts and a function room on second floor. Julio Barbosa, who owns the Bijou building, bought 54 Main.

The next highest property was a sweet little house at 30 Ash Street that sold for $167,500. The 910 square foot home has three bedrooms and one bathroom.

Many of the remaining land parcels were clearly in wetlands, but some abutters were willing to pay to expand their yards and have piece of mind that no one would build on them. One woman paid $95,000 for a parcel next to her home and got a big hug from her son-in-law after an intense back-and-forth with another bidder. 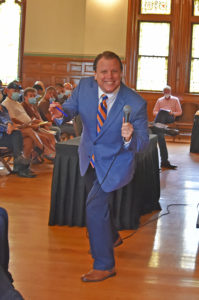 Auctioneer Paul Zekos reacts to the camera during Fairhaven’s tax possession auction on 9/27/21 in the town hall auditorium. Photo by Beth David.

Several other properties got some hot action, with several others hitting the $100K mark, or close to it.

There were some deals, too. 0 Tripp Street, was the lowest sale at $10,000, even though it had looked like 0 Abbey Street was not going to sell at all. When Mr. Zekos said they could not wait until the end of the auction, it had to go then or not on that day, the bidding got going again and it sold for $25K.

The Buzzards Bay Coalition, the only nonprofit that the Neighb News recognized, picked up 0 Lincoln Street, on the Acushnet line, for $47,500.

Martin and Janice Lomp, who live at 21 Buist Avenue, and had tried to get two adjacent parcels at 0 Buist Avenue taken off the list, bought the parcels for $60,000. The couple had at­tended a Select Board meeting claim­ing that they were going to pursue an adverse possession claim. They had asked the town to either take it off the list, or at least disclose that they were contem­plating the pursuit of that claim. The town did neither and the bidding started at $30,000. Several people clapped when the Lomps won the bid.

“This was an historic sale,” said Mr. Zekos. “People want to invest in this community. The competition was intense. Twenty-eight of 28 properties sold.”

He said it “exceeded all expecta­tions,” and it is unusual for all properties to sell. He said it shows a tremendous amount of interest in Fairhaven.

“It was open to the public and transparent and an even playing field for everyone,” he said.

Fairhaven Finance Director/ Treasurer/Collector and acting Town Administrator Wendy Graves said the auction will put $1,796,500 into the town’s coffers and will put the properties back on the tax rolls.

Mr. Zekos would not say if he was disappointed in the amount the commercial building sold for. He said the point is not just getting revenue for the town, but also to bring that part of Main Street alive again, and make it a “vibrant part of the community.”

Ms. Graves said the storefronts do not need a lot of work to get tenants in.

“It needs someone with a vision,” said Mr. Zekos.

Buyers also had to pay a $1,000 special assessment fee, and a 5% buyer’s premium, which goes to the auction house, so there is no cost to the town.