One of Fairhaven’s most visible figures died suddenly this week, leaving friends and acquaintances alike stunned. Ellie Sylvaria, 53, long time member of the Fairhaven Village Militia, and its Commander, died from an apparent heart attack on Monday.

As per his wishes, there will be no wake or funeral. He will be cremated and a memorial service will be held sometime in the future.

Mr. Sylvaria, a large man with a big heart and big smile, was probably best known for his role in the militia. He was at every encampment, and stayed overnight even when the conditions were not ideal. He told the Neighb News more than once that he loved sleeping outside and would never miss a night.

He was especially proud of his direct lineage to Bartholemew West, whose house was burned down in the 1778 British raid on Fairhaven. 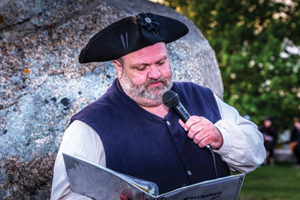 Fairhaven Village Militia Commander Ellie Sylvaria speaks to the crowd on 5/25/19, right before the firing of the big cannons during the spring encampment on Memorial Day Weekend at Fort Phoenix in Fairhaven. Photo courtesy of James Mahaney.

His Facebook page and the pages of other Fairhaven groups filled up with tributes to him, including pictures of him in his militia uniform. Many of the posted pictures show him fast asleep in his militia attire, indeed, as a soldier might catch a few winks in between assignments.

“The biggest thing I’ll miss will be [your] bear hugs. Thank you for always having a listening ear and helping me pick on Matt. I love you and I’ll miss you like crazy. Rest easy Ellie,” wrote Shannon Medeiros on Facebook.

“You had a smile that could light up any room and get everyone smiling and laughing you had passion for your son—landscaping business—and your militia, you were the type of person who was there whenever anyone needed you – and when you and Peter DeTerra went camping with the Boy Scouts you two were like two teenagers causing trouble lol—I will miss [your] FB post and seeing your smiling face—and all your silliness—your smile was your trademark and your smirk was your little devilish side. I will always hold you in my heart we will miss you terribly—Fly High Ellie Sylvaria you have earned your wings way too young,” wrote Melissa DeTerra. 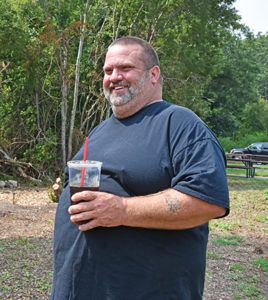 Ellie Sylvaria flashes his signature smile on 8/17/18, while helping his son Alex work on his Eagle Scout project at the stone building on the bike path in the Little Bay Conservation Area in Fairhaven. Neighb News file photo by Beth David.

“I don’t even know what to say besides I was lost yesterday when I heard the news,” wrote Tim Smith. “I’ll miss you Uncle Ellie you always had my back and supported me no matter what, if I ever needed to laugh I knew exactly where to go. I’ll never forget you. RIP Uncle E.”

“Thank you for always being a kind, loving gentleman who gave the best bear hugs!!” wrote Julie Krause. “I’ll miss you so very much Ellie Sylvaria… rest in paradise my sweet, sweet friend.”

“Ellie Sylvaria you will be deeply missed by many, but you impacted my life deeply as a mentor and great friend,” wrote Matt McDonald. “Being part of the Fairhaven Village Militia is like being part of a family and you welcomed me in 8 years ago and it truly won’t be the same without you around the camp fire this year and years to come. RIP Ellie ‘Militia Dad.’”

“Ellie loved Fairhaven and he gave a lot to it in return,” wrote militia member and Fairhaven Office of Tourism Director Christopher Richard.