A total of 29 students participated, including 18 from the middle school and 11 from the high school.

Students had to submit a letter of recommendation along with an application to be considered for the program. The final roster was decided on by the School Resource Officers and school administration.

Successful cadets completed 36 hours of classroom learning and field observance, including a four-hour long ride-along with a Fairhven police officer. 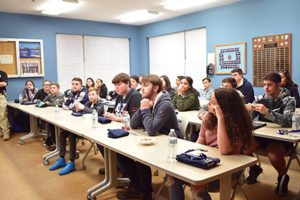 Students from Elizabeth Hastings Middle School and Fairhaven High School participate in the classroom portion of the Juvenile Police Academy, which ran from February through March this year.. Photo from the Fairhaven police Facebook page.

Many local busi­nesses contributed to the success of the program: WalMart provided support with a grant to fund the Academy, Papa Gino’s pro­vided pizza on multiple nights and I.N.I Screen Printing and Em­­broidery provided shirts for all students.

The cadets also participated in hands on lessons and were trained in CPR/First Aid, accident reconstruc­tion, radar, fingerprinting, crime scene, firearms use and safety, GPS naviga­tion search and rescue, use of force, OUI sobriety goggles and breath testing, booking process.

Students earned completion diplomas at a ceremony on Tuesday, March 26, from the Resource Officers. Also in attendance were Fairhaven Police Chief Michael Myers, Town Administrator Mark Rees, other Town officials as well as family and friends of the cadets.