Fairhaven Town Meeting members quickly got through 19 articles at the Special Town Meeting on Tuesday, 11/15/22, with none of the anticipated controversy developing on some articles, and very little discussion on any articles.

In the very first article STM approved $92,000 in spend­ing for gasoline for eight departments from free cash to supplement their FY23 budgets passed at the June 18, 2022 Annual Town Meeting. TM approved another $20,000 from the water ($12K) and sewer ($8K) enterprise funds, also for gasoline.

Other supplemental spending for the FY23 budget included $31,252 for a variety of expenses, with the funds coming from free cash and enterprise funds. The article also transferred money in most departments for salaries and wages.

Article 8, which had seemed poised to garner some resistance, passed with little opposition. The article appropriated $16,000 for new office furniture for the Town Adminis­trator’s office. 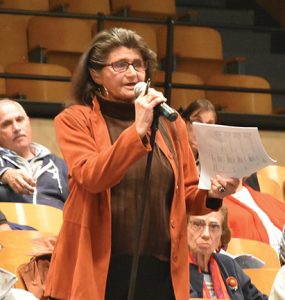 TA Angie Lopes Ellison showed in a video that the furniture in her office is damaged and insufficient.

She is using the window sill for storage and filing; the desk is broken; the shelving she does have is not adjustable and cannot accommodate some files. Ms. Ellison said the conference table is too small for the meetings she has in the room; and her  desk is in two pieces, not an actual L shape, which creates challenges.

Her initial estimate was higher than the $16,000 because she priced office furniture. After the Finance Committee asked her to get the price down, she priced home office furni­ture, which cut the price in half, although it is not ideal.

Ms. Ellison told TM that she meets with other town administrators, people and officials from other com­mu­nities. Having the first impression of Fairhaven being a professional office would make a big difference in how the town is perceived, she said.

She said she is looking for furniture that will be durable and will be respective of the historic nature of the building.

Town Meeting member Barbara Acksen asked if Ms. Ellison had looked into using some of the old high  school furniture that is in storage, calling them “quite elegant,” and said they would be in keeping with the historic nature of the building.

Ms. Ellison said she had not looked at that furniture, but she was aware that the Alumni Association managed them.

In the end the article passed with some opposition. 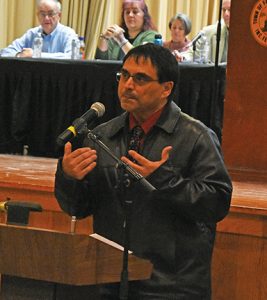 rticle 5 was passed over at the request of the petitioner. The Home Rule Petition from the Fairhaven Housing Authority, would have authorized the Select Board to petition the state legis­lature for a home rule petition that would allow the FHA to prioritize Fairhaven resi­dents for FHA units. The current system is centralized and run by the state resulting in the “dispropor­tionate housing of non-local applicants.”

Town Moderator Mark Sylvia said the article will be presented again at the annual TM in April.

The Safe Routes to Schools article passed, which will allow the Select Board to enter into easement agree­ments in order to construct the project that will narrow Sconticut Neck Road and create bike lanes from the 99 plaza to the southern end of the Leroy Wood School.

The project is being funded with $2 million in federal and state grants.

Public works superintendent Vinnie Furtado explained, first in a video, and the at the microphone when the video went awry, that there are 16 permanent easements and 13 temporary easements necessary to complete the job.

The permanent easements are required to move telephone poles, which will put the wires outside of the original right of way.

The temporary easements are required to allow grading and construction of the road and side­walks. The easements will have an “inconvenience fee” to home owners for the temporary loss of use or nuisance caused by the construction.

The project came about due to a dangerous traffic pattern at the intersection of the bike path and Sconticut Neck Road. Cars heading north on SNR tend to go around on the right of cars taking a left onto David Drown Boulevard causing people using the bike path to get “nearly clipped,” said Mr. Furtado. 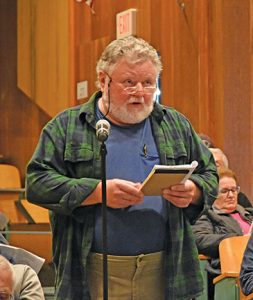 TM member Joseph Gruber said he was pretty sure everybody in town was familiar with the “fiasco that is Sconticut Neck Road and the bike path.”

He noted, however, that although the $2 million was not coming from Fairhaven, it was still tax money.

He asked if a simple push button crosswalk would fix the problem.

Mr. Furtado said the new crosswalk will be “video recognizable,” so people will not even have to push the button. He also noted that there is a light system at the spot that has not alleviated the danger.

We all pay state taxes, said Mr. Furtado, but the money is not out of “town coffers.”

Ms. Acksen asked how many trees would be cut down, because whenever the town takes state money for a road project, she said, it seems a lot of trees get cut down, adding that is why she wanted a tree bylaw.

Mr. Furtado said he did not know how many, if any, would be cut down.

The tree bylaw that Ms. Acksen referred to did not get discussed.

Hearing no motion, there is no action, said Mr. Sylvia.

Article 17, to reduce the TA’s salary to $1, also received no motion and therefore died.

Mr. Sylvia explained that the TA has a contract with her salary de­fined. Reducing the salary would be a breach of contract, and is “beyond the scope” of TM, according to a letter from the Select Board to TM.

A citizens petition to accept Alves Way as a public street also did not move forward as the developers did not engage in the process required for a street acceptance.

A citizens petition to hard surface Sandra Lane also received no motion, and therefore no action was taken.

One article (15) that did get some discussion, allows for special police officers to serve until 70 years old instead of 65. 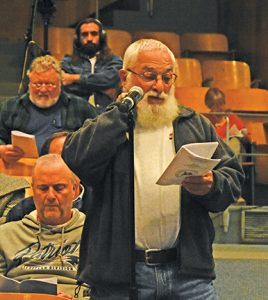 TM member Jeff Lucas asked a series of questions, including why the change came about. Fairhaven Police chief Michael Myers said that when the town adopted the special legisla­tion in 2003, the state placed the age limit as 65. The state has since changed it to 70.

Chief Myers said that special officers are retired officers from the Fairhaven Police Department and only work details. The money they are paid comes from third parties, such as the construction company performing road work.

Mr. Gruber asked if the town was having trouble filling details and suggested giving the work to the younger guys who can probably use the money more than the others.

Chief Myers said active duty officers always get the first chance at details, then it goes to the retired officers, then to other communities as needed.

• $50,000 to replace a valve at the South Street Pumping station, from the sewer enterprise fund;

• $75,000 in additional funds from  ambulance receipts for an ambulance that was approved at the June 18 TM;

• Transferred a range of amounts to fund labor contracts for all depart­ments, except Fire and Sewer;

• $53,100 from free cash to repair Fire Engine 4, which needs a complete engine rebuild;

The meeting adjourned at 7:55.

“So, I think we’re all a little shocked,” said Mr. Sylvia, looking at his watch.

The meeting is available on FairhavenTV.com 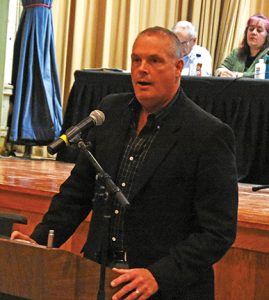