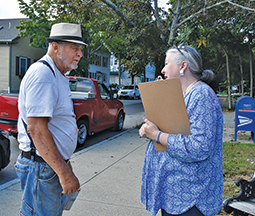 Cathy Delano talks to Bill Hebert outside the Fairhaven Post Office on Friday, 9/14/18, trying to persuade him to sign a petition asking the Selectboard to put a question on the ballot to ban pot shops in town. Photo by Beth David.

Some Fairhaven residents have started a petition urging the Select­board to put a question on the next ballot to prohibit retail marijuana shops in town.

Cathy Delano and Eleanor Crowell collected signatures last Friday in front of the Fairhaven Post Office, hoping to get enough signatures to convince Selectboard members to change their minds and put the issue on the ballot.

The group, which also includes Doug Brady and Bernard “Bernie” Roderick, believes that when people in Fairhaven voted to support the legalization of marijuana in the 2016 state election, they were not necessarily voting to have retail shops in town.

Fairhaven has a medical marijuana dispensary, but retail sales have not started yet. The town has a moratorium in place until 12/31/18. The group is also urging voters to persuade Town Meeting to pass an article extending the moratorium, which the Attorney General’s office must approve (see letter on page 22).

The Planning Board is holding a public hearing at its meeting on October 9, at 6:30 p.m., in Town Hall, to discuss the pro­posed bylaw that would regulate any retail mari­juana shops in Fairhaven.

The group is urging people to go to the Planning Board hearing.