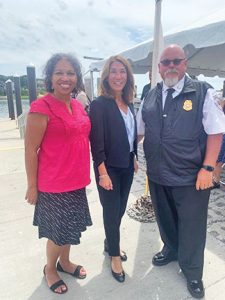 On 7/26/22, the Baker-Polito Administration announced nearly $10.8 million in Seaport Economic Council grants for 19 projects. The grants will help coastal communities advance projects that benefit com­mer­cial maritime industries, improve resident and visitor access to water­front assets, mitigate the impacts of climate change, and advance future dredging. The grants were approved at the 7/26 meeting of the Seaport Economic Council, chaired by Lieutenant Governor Karyn Polito at the Chatham Harbormaster Building in Chatham.

“I appreciate the hard work of the Seaport Economic Council members in evaluating and investing in projects that will deepen our maritime economy, promote economic development, and support resilient infrastructure in our coastal communities,” said Lt. Governor Karyn Polito, Chair of the Seaport Economic Council. “From the North Shore to the South Coast, today’s awards will advance important improve­ments along our waterfront.”

The Seaport Economic Council serves all 78 of the Common­wealth’s coastal communities. The Council awards grant funding to municipali­ties and other entities in support of projects that promote job creation and economic growth, transformative public-private partnerships, educa­tional oppor­tunities for young people, local economic development planning efforts, coastal infra­structure im­prove­ments, and the planning and permitting of saltwater dredging.

With this latest round of grants, the Seaport Economic Council has invested approximately $77 million through 164 grants in 54 coastal communities since 2015.

“Our waterfronts are economic drivers for Massachusetts, support­ing maritime industries and drawing visitors to enjoy our beaches and local businesses,” said Housing and Economic Development Secretary Mike Kennealy. “Providing the resources to shore up our waterfronts through infrastructure improvements and coastal resiliency efforts is integral to both the long-term environmental and economic health of our Commonwealth.”

Fairhaven received $1 million for continuation of the Union Wharf project. The Town will use this grant for the reconstruction of the western side of the north wall, Phase 5 of the overall renovation of Union Wharf. Union Wharf provides the only public, commercial vessel off-load space available to the entire fleet within New Bedford harbor currently primarily used by the commercial fishing industry.

The town of Fairhaven also received $200,000 for dredging in the West Island channel. This grant will allow the town to be “shovel ready” with all necessary permits and studies completed to enable needed dredging in the West Island Channel in Naske­tucket Bay and boat ramp areas. Ultimately, the project will increase the safety and usage of the waterway by increasing the minimum depth to at least seven feet below mean low water, and charting the dredged areas based on post dredge bathymetric surveys.

Town Administrator Angie Lopes Ellison said that town planner Paul Foley and Habormater Tim Cox had been working on the grants for a long time.

Both projects, she said, will allow for “economic growth in the water­front areas.”

The work on Union Wharf is a multi-phase, multi-million dollar project that has been going on for several years.

The West Island dredging will increase the depth of the channel and push back the encroachment of the sand bar at Hoppy’s Landing. The sand bar has cause navigational headaches for years and is getting significantly worse with each season.