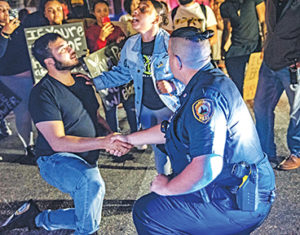 Fairhaven police officer Chris Bettencourt kneels with a protestor at Benoit Square in Fairhaven on 6/1/20 when a peaceful protest that started in New Bedford made its way to Fairhaven, where it assembled for a short time before heading back down Coggeshall Street. Photo by Glenn C. Silva.

The Black Lives Matter protests causing upheaval in cities across the country have not ignored this area. But, so far, local protests have been peaceful. A group protesting against police brutality in response to the death of George Floyd, made its way to Fairhaven on Monday, 6/1.

The group of about 60 people started in downtown New Bedford and eventually made its way up Coggeshall Street to Benoit Square, where protesters were greeted by Fairhaven police and other local law enforcement agencies.

But there were no clashes. Instead, several Fairhaven officers took a knee with protesters, who assembled in Benoit Square, then turned around and marched back to New Bedford, around 7:30 p.m.

Lt. Kevin Kobza, Fairhaven Police spokesperson, said the department re-routed traffic to give the protesters a safe space to assemble and protest. The purpose was not to block them.

“We spoke with them,” said Lt. Kobza. “We had a really positive dialogue and then they left.”

He said there was no advance notice that the group was going to Benoit Square. 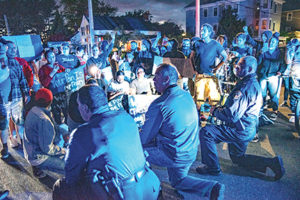 L-R: Sgt. David Sobral, Fairhaven Police Chief Michael Meyers, and Lt. Kevin Kobza kneel with protestors at Benoit Square in Fairhaven on 6/1/20, when a peaceful protest that started in New Bedford made its way to Fairhaven, where it assembled for a short time before heading back down Coggeshall Street. Photo by Glenn C. Silva.

“I thank God every day that we live in a country that allows that kind of protest,” said Lt. Kobza. “I wish it was for a different reason, but I don’t get to choose.”

He knelt with the protesters, along with Chief Michael Myers and Sgt. David Sobral, and several other officers.

He said they did it because it showed, “that we don’t condone what happened” to George Floyd.

Mr. Floyd, a 46-year-old Black man, died of asphyxiation after he was handcuffed behind his back, placed on his stomach, and a white police officer knelt on his neck for more than eight minutes, in Minneapolis, MN. His death prompted days of protests, some violent and ending in riots, across the country.

In Fairhaven, though, the protest was peaceful and respectful.

Lt. Kobza said they knelt, shook hands, and then both sides said “thank you very much.”

He said there was no damage to any property.

“They appreciated that we were not supporting what happened,” said Lt. Kobza. “When they left, there wasn’t even a piece of trash left behind.”