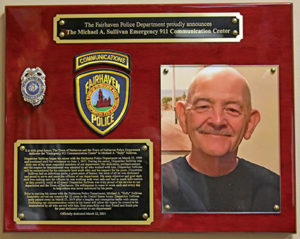 This plaque hangs in the foyer of the Fairhaven Police Department, where all who enter can see the smiling face of Michael A. “Sully” Sullivan, and read his story and the reasons the dispatch center was named after him. Photo by Beth David.

By all accounts, and we do mean ALL, Michael A. “Sully” Sullivan would not shy away from the honor of having his name affixed in grand style to the Fairhaven Police Department dispatch center. On the contrary, he’d be absolutely thrilled, so said members of his family at an unveiling of the signs last Tuesday, 11/23/21. The center was officially dedicated on March 22, after a vote by the Fairhaven Select Board.

“He would love it. He’s in heaven looking down loving every second,” said his widow Coreen before the official proceed­ings began. “It’s amazing how much he loved being here.”

She said the station was his “home away from home,” and he would be “so proud” to know they named the dispatch center after him.

It held a special place in his heart, she said: “They loved him, and he loved them.”

Mr. Sullivan died from cancer in 2019. He retired after 22 years in the Army before embarking on his second career as a dispatcher, a post he held for 18 years.

Mr. Sullivan’s wife, their children and grandchildren, his mother and other relatives gathered in the small foyer of the police department for a short ceremony. Select Board Chair­per­son Bob Espindola, SB member Stasia Powers, Acting Town Administrator Wendy Graves, Fire Chief Todd Correia, and a group of police officers and fire department personnel also attended, although many had to stand outside in the cold, or in the hall. 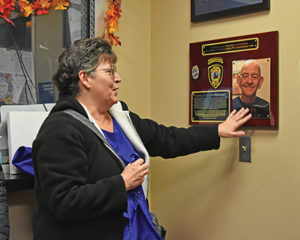 Coreen Sullivan explains that her husband Sully loved the shirt he is wearing in the picture that hangs in the foyer of the Fairhaven Police Department, where all who enter can see his smiling face, and read his story and the reasons the dispatch center was named “The Michael A. ‘Sully’ Sullivan Emergency 911 Communications Center” at a ceremony on 11/23/21. Photo by Beth David.

“He worked whenever we needed him,” said Chief Myers. “He would’ve worked 24/7 if he could have. If we would’ve let him.”

In his presentation, Chief Myers said Mr. Sullivan was an “absolute rock.”

“He was the epitome of a police dispatcher,” said Chief Myers. “His dedication was second to none.”

He said Mr. Sullivan was the best dispatcher they ever had.

After Mr. Sullivan died, Executive Assistant Juanna Adesso put up a photo of him. But that did not seem adequate, so they looked into doing a bit more. After the SB voted to name the dispatch center after him, the work to get the signage began. It took a lot to get the plaques, said the chief.

A large sign hangs above the dispatchers’ window: “The Michael A. ‘Sully’ Sullivan Emergency 911 Communications Center.”

A smaller plaque has a picture of Mr. Sullivan, a Fairhaven police badge and patch, and the story of his service. Ms. Sullivan noted that he loved the shirt he was wearing in that picture.

“Mike is here with all of us,” said Ms. Sullivan. “He’s smiling down. He loved you guys. He loved all of you.”

She thanked them for all the love they showed to him and for naming  the dispatch center after him.

“He’ll always be here,” she said. “Telling you guys what to do forever.”

The department also presented a plaque to the family, which included the story of the naming of the center.

“He was very honored and proud,” to be a dispatcher, said Mr. Sullivan’s mother Millie Hella, adding he is “probably doing the same thing upstairs.” 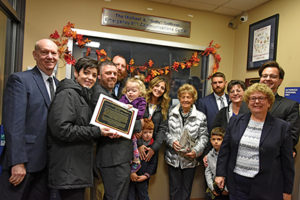 Family members of Michael A. “Sully” Sullivan, including his wife, mother, and children, pose for a picture after a ceremony unveiling the signs for the “Michael A. ‘Sully’ Sullivan Emergency 911 Communications Center” at the Fairhaven Police Department on 11/23/21. Photo by Beth David.

Mr. Sullivan’s two sons, Michael Jr. and James; and his two daughters, Kelly Field and Holly Gallagher; and his three grandchildren were also there, along with other friends and relatives.

“This is amazing,” said Ms. Field. “He would absolutely love this. He would be smiling from ear to ear. He’d be in his glory.”

She said it was her father’s “retirement job,” after leaving the Army, and “he just fell in love with it.”

“I’m happy for dad,” said James. “He loved it. It’s nice to see everyone remembers him.”

He said his father loved the night shift because there was more action then.

Michael also said his father would be “honored.”

The department showed how much a part of the team his father was. He felt he was “integral” to the team.

“They made him feel that way,” said Michael. “He took pride in the work.”

And he would work a double, sleep for a bit, and then be ready to go back.

“The job came naturally to him,” said Michael. “Not that it was easy. But he could do it, and he enjoyed doing it.”

He said it was “touching” to see the respect the chief and everyone else who was there for the ceremony showed to his father. 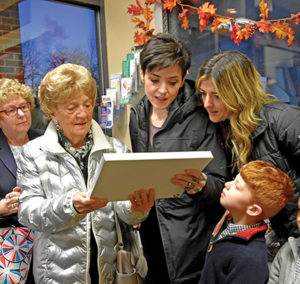 L-R: Millie Hella, Sully’s mother, and Sully’s daughters Holly Gallagher and Kelly Field, read the plaque that was given to the family with his story explaining why the Fairhaven Police Department dispatch center was named “The Michael A. ‘Sully’ Sullivan Emergency 911 Communications Center” after a ceremony on 11/23/21, while young Jack Field strains to see what they’re all taking about. Photo by Beth David.

“We appreciate it,” said Michael. “It was a lovely ceremony and I can’t thank them enough.”

Ms. Sullivan’s daughter Holly agreed that the job was “the love of his life.”

Naming the dispatch center after him is his legacy, she said, and he would love it.

She said that after retiring from the military, her father had a few different jobs, but they were just jobs. They did not hold the purpose to him that being in the military had. He had always wanted to be part of the police department. The dispatcher job made that possible.

“He found his purpose here,” she said.

TJ got a bit tongue-tied to talk about his grandfather, but it appears they did like watching TV together.

Jack was a bit more forthcoming, saying he liked sitting and rocking in the chair with his grandfather, watching TV, and coloring.

He also said he liked the picture they used in the plaque.

“He loved that shirt,” said Kelly. 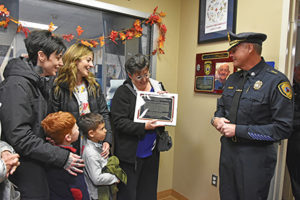 Sully’s wife, Coreen Sullivan, holds the plaque that was given to the family with the story explaining why the Fairhaven Police Department dispatch center was named “The Michael A. ‘Sully’ Sullivan Emergency 911 Communications Center” after a ceremony on 11/23/21. L-R: Sully’s daughters Holly Gallagher and Kelly Field, his wife Coreen, his grandsons Jack and TJ Field, Fairhaven Police Chief Michael Myers. Photo by Beth David. 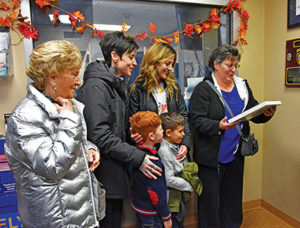 Sully’s wife, Coreen Sullivan, holds the plaque that was given to the family with the story explaining why the Fairhaven Police Department dispatch center was named “The Michael A. ‘Sully’ Sullivan Emergency 911 Communications Center” after a ceremony on 11/23/21. L-R: Sully’s mother Millie Hella, his daughters Holly Gallagher and Kelly Field, his wife Coreen, his grandsons Jack and TJ Field. Photo by Beth David. 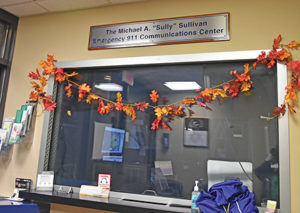 The sign above the dispatcher’s desk in the foyer of the Fairhaven Police Department officially names “The Michael A. ‘Sully’ Sullivan Emergency Communications Center,” unveiled on 11/23/21. Photo by Beth David.