George “Sonny” Holt and his sister Elizabeth “Betty” Palm, both born and raised in Fairhaven, have published the historical fiction novel Run Away to Glory – Helen’s Story. It’s rich in history, during which slavery of African Americans took place and the importance of the Underground Railroad. Set in two prime locales, Vermont and Massachusetts during the 1850s, it’s the story of a Quaker couple and their heroic efforts to rescue and escort slaves on their way north to freedom.

There are numerous intriguing subplots, like the “factory girls.” These young Vermont farm girls, some as young as 15, leave their farm homes to work the cotton mills in Massachusetts. They tell of horren­dous working conditions as they spin cotton into cloth on their power looms. The same cotton picked by southern slaves. The book is gripping and may bring tears to your eyes but it is also sprinkled with lighter and quite often laughable moments. 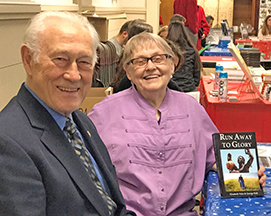 Fairhaven natives, George “Sonny” Holt and his sister Elizabeth “Betty” Palm, have coauthored a book about the underground railroad, “Run Away to Glory.” Submitted photo.

Some real-life experiences of the authors are also referenced in the book. For example, two runaway slaves are found in a hidden room, almost iden­tical to the room in their grandmother’s old farmhouse located in East Fairhaven. Also, Ginny-town in North Fairhaven, is where Gypsies encamped during summer months. This is the place in the novel where two runaways were kept in hiding from local authorities and bounty hunters.

There are numerous historical events associated with the Whaling fleet of Fairhaven including a quite detailed account of Manjiro Nakahama, the first Japanese person to live in the US, after being rescued by Captain Whitfield. And there is a suspenseful and gripping murder trial that takes place in New Bedford that will keep you on the edge of your seat waiting for the outcome

“Run Away to Glory” is a story of unsung heroes, of both races, some who gave their lives for acting out their convictions. This compelling and heart-warming book includes more than 30 historic photos and illustrations. Both soft bound and Kindle editions are available on Amazon where it has been receiving 5 Star ratings. The Millicent Library has a copy for borrowing.

“Run Away to Glory is a work of art,” writes Charles K. Murphy in a review that is published in the book. “Though fictional, you can envision the story amongst many historical facts. I was fully engaged in the story lines that involved New Bedford and Fairhaven. They touched upon some great local events…the story brings alive some of the struggles and battles of silent heroes who gave everything, including life, to the work of the Underground Railroad.” •••