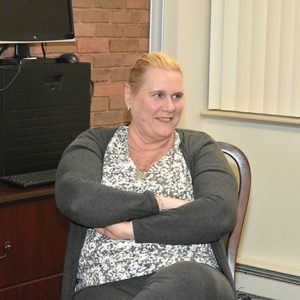 The Fairhaven Housing Authority has welcomed Janet Falone as its new Executive Director as of 1/17/23. Ms. Falone previously worked as the Assistant ED of the Mashpee HA, which also administers Mattapoisett.

Ms. Falone said it’s a bit early for her to be talking about changes, but she was quick to acknowledge the organization’s best asset is its staff.

“They’ve been very helpful,” said Ms. Falone, adding that they are knowledgeable.

“It’s an excellent staff,” said outgoing ED Krisanne Sheedy, who was staying on for a few days to help with the transition. “They are very invested in the Fairhaven Housing Authority.”

The two women met with the Neighb News and FHA board chairper­son Carol Alfonso to talk about the FHA under Ms. Sheedy, and what is ahead.

Ms. Falone said she toured all the facilities and it looked like the authority has done a good job of keeping up with maintenance in the buildings, which is “not easy.”

She would like to see more family housing, she said, which is a state­wide problem. Fairhaven HA manages 285 units across six developments, with six units of family housing and 279 units of senior/disabled housing.

One option, said Ms. Falone, is to have the authority ad­minis­ter the state voucher program in town. It works like the federal Section 8 program, but is for Massachu­setts only, and all applications, etc., would go through the FHA. 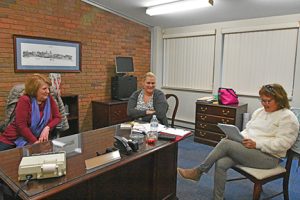 L-R: Krisanne Sheedy, outgoing Executive Director of the Fairhaven Housing Authority, and new ED Janet Falone, listen as FHA board chairperson Carol Alfonso reads a statement to each of them from the FHA board on 1/20/23. Photo by Beth David.

Ms. Sheedy said that during her 14 years as ED, the FHA had four major pro­jects: new roofing, parking lot pav­ing, boiler and ventilation system upgrades, and new carpets in all the common areas.

She is especially happy that the authority has both full time and part time Resident Service Coordinators. She said she made a presentation to the board, and they agreed, long before the state started offering grants for the program. It started out as one part time position, and now is one full time, one part time.

“And the two are as busy as beavers,” said Ms. Sheedy.

The RSC helps residents with a huge variety of issues that may come up in their lives.

Not all changes have been good, though, they all admit. The state has taken over the list of who is eligible to get an apartment. The state uses its own criteria that does not prioritize residency or home town. The result has been that Fairhaven residents are often pushed to the bottom of the list in favor of people who have no ties to Fairhaven at all.

“The state dictates to us,” said Ms. Sheedy, noting that when the local HA managed its own list, it used the same priorities and preferences, and Fair­haven people got into the Fairhaven units. “The state centralized the list.”

“Meanwhile, little Mary who has lived in Fairhaven her whole life, is basically at the bottom of the list,” said Ms. Alfonso.

The FHA board is working on a home rule petition to send to the state legislature that would allow Fairhaven to move Fairhaven residents up on the list. But that option has legal hurdles and might be a long way off.

As for her management style, Ms. Falone said she likes to move around and does not plan on being tied to her desk. She wants to talk to the tenants to find out what they think and what they need.

“I’ve been in housing for some years,” said Ms. Falone. “I want to improve where I can. I want to be able to listen to the tenants.”

Ms. Alfonso read a statement from the FHA board to thank Ms. Sheedy and to welcome Ms. Falone.

“Myself and the board of commis­sioners would like to thank you for your service and guidance through­out the years,” said Ms. Alfonso to Ms. Sheedy. “Congratulations on your well-earned and well-deserved retirement. I wish  you all the best.”

To Ms. Falone, she welcomed and congratulated her, saying the commissioners, “are looking forward to working with you and continue offering our services for all residents and carry on the good reputation of the FHA.”

L-R: Krisanne Sheedy, outgoing Executive Director of the Fairhaven Housing Authority, and new ED Janet Falone, listen as FHA board chairperson Carol Alfonso reads a statement to each of them from the FHA board on 1/20/23. Photo by Beth David.

Ms. Sheedy said she wanted to thank the “fabulous staff,” for making her 14 years so productive.

She said town officials in every capacity have also helped to make it all work, starting with the FHA board, and town departments. Whenever the authority needed anything, she said, from town hall, from Council on Aging, from public works, from fire or police, the departments responded without hesitation.

“Just, everybody,” she said. “They always made us feel included and always supported our mission.”

Ms. Sheedy will be staying on in a part time consulting capacity to help with the modernization project, which will upgrade 107 units with new bathrooms, new kitchens, new floors. About a third of the project is already done. It is 100% paid for by the state.

Ms. Sheedy said there is still a lot to do. Some complexes were built in the 1960s.

She has no regrets, she said, although the building of new units “never materialized.”

The HA owns 2.2 acres adjacent to Oxford Terrace on Main Street that the authority is hoping to develop.

The Housing Authority is for low income residents; rents are based on income, with 30% of monthly income going towards rent.

To learn more about the FHA, call 508-993-1144, visit http:// fairhavenhousing.org/ or stop by the office, which is located at Oxford Terrace, 275 Main Street, Fairhaven.