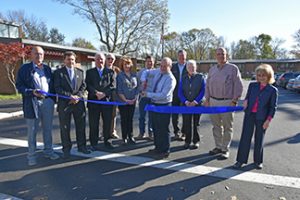 By Beth David, Editor
The Fairhaven Housing Authority is on a roll. The improvements to the facilities are adding up, with solar installed for electricity (see last week’s issue, 11/9/17), and a re-paved parking lot that included adding 11 spaces, new curbing, and increased access for people in wheelchairs, or those walking with assists, such as canes and walkers.

The FHA held an official ribbon cutting, with town officials and contractors, on Thursday, 11/9.
The bulk of the project was paid for with Community Development Block Grant funds (CDBG), which put in about $440,000. The FHA kicked in another $40,000. 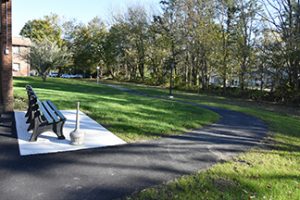 As part of the repaving/revamping of the parking lot at the Fairhaven Housing Authority’s Oxford Terrace property, the back yard area was also spruced up. This bench was added, and the grade on this walkway was lessened to make it easier for tenants to walk. Photo by Beth David.

In addition to re-paving the lots and the curbing, the project also updated the aging lights. The new lights are more efficient LEDs, and the residents seem to like them, said FHA Executive Director Krisanne Sheedy.

Oxford Terrace, and its parking lot, were constructed in the mid 1970s. The lot has had some sporadic work, and an addition, but this is the first wholesale re-vamping of it.

“It was a true team effort,” said Linda Overing of Breezeway Farm Consulting, which also worked on the project.

The project re­con­figured some parts of the park­ing lot, adding wheelchair access­ible spots in a place that was already being used that way by residents.

“There was high demand down there,” said FHA Chairperson Jay Simmons.

FHA member Anne Silveira said the tenants actually seemed to enjoy the project, with some of them sitting outside to watch the activities every day.

As part of the repaving/revamping of the parking lot at the Fairhaven Housing Authority’s Oxford Terrace property, the back yard area was also spruced up. The walkways to the gazebo were all repaved and the whole area was re-seeded. Photo by Beth David.

The important thing, they all agreed, is that now the lot is completely compliant with the Americans with Disabilities Act (ADA). It is now easier for tenants to get back and forth from their cars and apartments.

As the popul­ation in Fairhaven ages, it is more important than ever for the facilities to be up to date, said Mr. Roth. He said the town’s new Master Plan puts a lot of emphasis on housing and “recognizes the needs of the future as the population ages.”

“It was a great collaboration,” said Ms. Sheedy. “And we have benefitted immensely.”

Oxford Terrace is not the only FHA facility that needs work. Ms. Sheedy said that the Dana Court parking lot also needs revamping, and there are other projects on the list.

Out back, the pathways were also re-paved and reconfigured. They are wider, have new benches, and some of the steep grades have been lessened to make it easier for walking.

People were not even using the back area because it was “all beat up,” said maintenance worker Tom Caron. “They regraded the whole thing.” •••