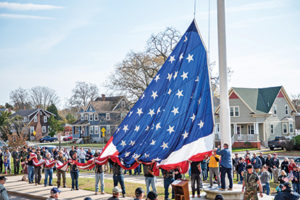 Members of the Marine Leathernecks motorcycle club hold the “Big Flag,” which is 30 feet by 50 feet, to keep it off the ground as it get raised at Fairhaven High School during a Veterans Day ceremony after the parade on 11/11/19. Photo by Glenn C. Silva for the Neighb News.

Fairhaven honored veterans on Veterans Day, 11/11/19, with a parade along Main Street from Livesey Park to the high school, and a ceremony at the end that included the raising of the “Big Flag.”

George Brownell, a Vietnam Veteran, reminded the crowd of hundreds that this year marks the 100th anniversary of Veterans Day. World War I ended at 11 a.m. on 11/11/1918, and was originally named “Armistice Day” by President Woodrow Wilson for Germany signing an Armistice to end the war. The day became Veterans Day in 1954 to include veterans of WWII and the Korean conflict. All veterans are now honored on November 11.

Locally, many town halls, churches and other buildings with bells, rang them at 11 a.m. on Monday.

Mr. Brownell pointed to a photo in the program book, of a transport nearing the beach at Normandy on D-Day. He said the man looking out could see machine gun fire and his comrades dead on the beach.

“We are the land of the free because of the brave,” said Mr. Murphy.

He said he thought of his father, who was on a mine sweeper. He said his father never talked about feeling stress during his service. Mr. Murphy said whenever he feels stress, he thinks of veterans. 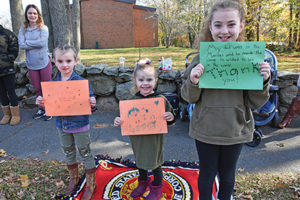 L-R:: Trinity, Bella, and Layla hold signs for their dad during the Fairhaven Veterans Day Parade, 11/11/19. Trinity’s sign says “Thank you so much for your selfless actions!” Layla’s sign says “My dad was in the Marines and he made the change he wished to see in the world. Thank you.” Bella’s sign depicts her thanks in art form. Photo by Beth David.

“The United States Military is a melting pot of service members coming from all different walks of life who quickly learn there is no time for petty concerns like the color of our skin, gender, age, or religious beliefs,” said Cmdr. Robitaille.

Instead, she said, the focus on training, survival, and completing their mission to return home safely.

“Service members place their lives in the hands of their fellow comrades and from this comes a mutual sense of respect, tolerance and trust,” said Cmdr. Robitaille. “It was my soldiers and leadership that helped me complete my overseas missions and return home safely to my family, and to this day we still have that same mutual understanding of tolerance, respect and trust.”

She said it was one of her “favorite take-aways” form the Army, it bonded them together.

“Tolerance, respect and Trust, these are characteristics society could use more of and I believe veterans are one of most effective tools in spread­ing these characteristics,” she said. “They are the 1% who put aside all judgements, toed the front lines and worked as a team for the greater good of humanity.”

She said all veterans took the same oath to defend the USA from foreign and domestic enemies at all costs.

“And it is this oath that we as civilians are forever in debt to,” said Cmdr. Robitaille.

She then told the story of how she became involved with the VFW, when her father and uncle asked her to join. She laughed and thought she had nothing in common with the gentlemen at the VFW.

“What are they going to make of me, a young female soldier who just returned from overseas?” she said. “Well, as it turns out, we do have a lot in common, and my VFW comrades are probably some of the coolest friends I have.”

“They are charismatic, open minded, intelligent, hilarious, welcom­ing and just a pleasure to be around,” she said, noting that they share stories wit her and are her connection to American history. “And every conversation is a gift of knowledge that I can pass along.”

She encouraged young veterans to get active in the veteran community. 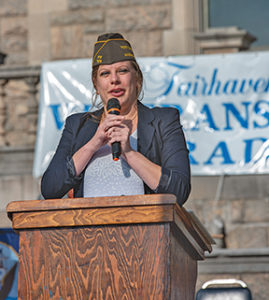 Keynote Speaker Deven Robitaille, Commander Post #7239/Acushnet, who served in Korea in the 35th Air Defense Artillery Brigade, addresses the crowd during a Veterans Day ceremony at Fairhaven High School after the parade on 11/11/19. Photo by Glenn C. Silva for the Neighb News.

Cmdr. Robitaille also told a story of her time in basic training. She said she was pulled out of formation and thought she was in trouble and facing more pushups. Instead, her drill sergeant gave her words of encouragement, telling her she would be a “great leader one day.”

She told young Robitaille that she led with her heart and never her ego.

“You never ask anyone to perform a task you have not performed yourself and you are never afraid to stand up and ask for help, which takes a lot of courage in this type environment.  Keep your head up, the other Soldiers are watching and look to you for guidance,” Cmdr. Robitaille said her drill sergeant told her.

She said it “honestly” blew her mind, but she realized that “leading by example is one of the most effective leadership tools one can use.”

“Veterans lead by example, they are the guardians of freedom and the American way of life,” said Cmdr. Robitaille.

She asked for everyone to “close the generation gap within our veteran community.

“In order to preserve the American Dream, we as the general public must take action. Vote in elections, speak out against injustice, volunteer, celebrate each other’s accomplish­ments, tolerate difference and guarantee all citizens feel the benefits of American Freedom,” she said. “I am asking you to follow my example, get involved and start building relationships with veterans, so these ordinary everyday heroes’ valor and bravery will be remembered by countless generations.”

The program also included an invocation by Kathleen Jorge; the Star Spangled Banner by Senior Chief Larry Jones; taps by Fairhaven High School students. Members of the Marine Leathernecks motorcycle club held up the 30×50-foot flag while it was being raised and the FHS band played the national anthem. Members of the public were invited to the VFW in Fairhaven for a free buffet after. 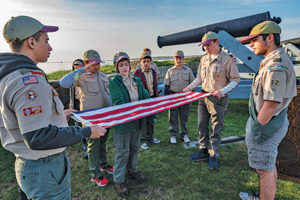 Members of Troop 52 of Fairhaven get ready to raise the flag in the morning on Veterans Day 11/11/19 at Fort Pheonix in honor of Roger Francis West Jr. who served in the Navy for two stints that encompassed more than 20 years. Photo by Glenn C. Silva for the Neighb News. 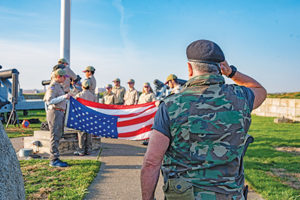 George Brownell salutes as members of Troop 52 of Fairhaven raise the flag in the morning on Veterans Day 11/11/19 at Fort Pheonix in honor of Roger Francis West Jr. who served in the Navy for two stints that encompassed more than 20 years. Photo by Glenn C. Silva for the Neighb News. 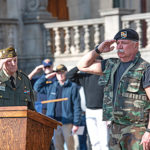 L-R: Emcee Gus Cote, and George Brownell stand at attention during a Veterans Day ceremony at Fairhaven High School after the parade on 11/11/19. Photo by Glenn C. Silva for the Neighb News. 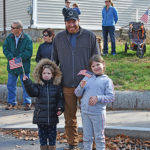 Evelynn and Ella wave flags to show support for veterans as they watch the marchers go by with their dad, Gary Fleurent, during the Fairhaven Veterans Day Parade, 11/11/19. Photo by Beth David. 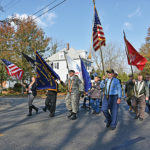 All branches of the US Military, POWs/MIAs, and the VFW are represented by flags in the Fairhaven Veterans Day Parade, 11/11/19. Photo by Beth David.