Fairhaven held its Independence Day ceremony on 7/4/22 with a parade, car cruise, and ceremony. Classic cars, Jeeps from various clubs, floats, political figures, and even protestors marched down Green Street to Fort Phoenix where the big cannons were fired. At Fairhaven High School, the Lions Club raised the big flag, while a group protesting the decision of the US Supreme Court overturning the Roe v. Wade decision, which gave women the right to terminate a pregnancy, knelt during the national anthem and Pledge of Allegiance. 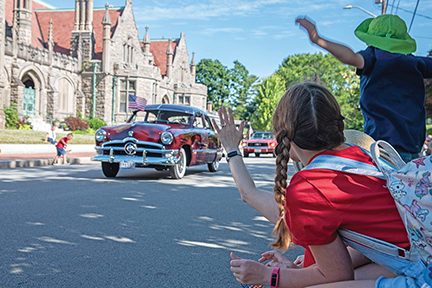 People line the streets, cheering and waving as cars pass by during one of the largest July 4 parades Fairhaven has seen in many years on 7/4/22. Photo by Glenn C. Silva for the Fairhaven Neighborhood News. 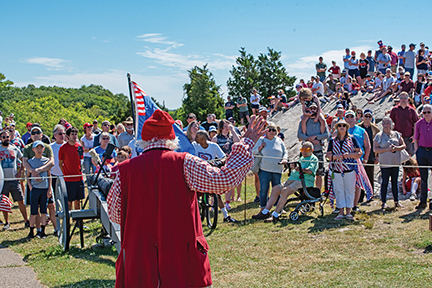 Fairhaven Office of Tourism Director Chris Richard addresses the crowd on 7/4/22 for an Independence Day celebration at Fort Phoenix before the five big cannons were fired, telling the story of how the British took the Fort, ate our beans, and burned our beloved town to the ground. But we rebuilt and named the new fort “Fort Phoenix.” Photo by Glenn C. Silva for the Fairhaven Neighborhood News. 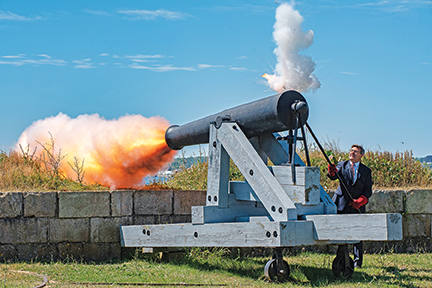 Fairhaven Select Board member Bob Espindola fires off cannon #3 at Fort Phoenix during the Independence Day celebration on 7/4/22. All five Select Board members got to fire off one of the five Civil War era Seacoast Defense cannons. Photo by Glenn C. Silva for the Fairhaven Neighborhood News. 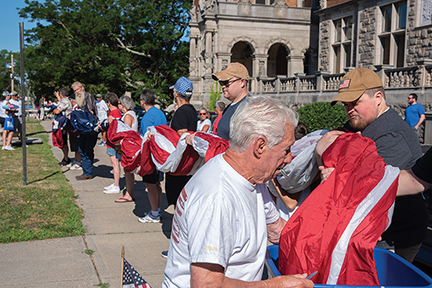 John Medeiros of the North Fairhaven Improvement Association (foreground) feeds out the big flag from its container to the drivers of the classic cars to raise the flag at Fairhaven High School as part of the town’s Independence Day celebration on 7/4/22. Photo by Glenn C. Silva for the Fairhaven Neighborhood News. 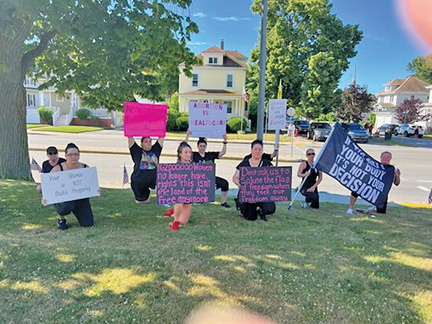 Peaceful protesters show their disagreement with the US Supreme Court’s recent decision to overturn Roe v. Wade, which gave women the right to terminate a pregnancy, by kneeling during the US National Anthem and the Pledge of Allegiance at Fairhaven High School on 7/4/22 during Independence Day ceremonies. Photo courtesy of Diane Hahn.