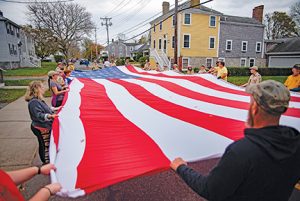 Volunteers carry the Big Flag along Main Street in Fairhaven during the Veterans Day Parade on 11/11/22. Photo by Glenn C. Silva for the Fairhaven Neighborhood News.

Fairhaven held its annual Veterans Day parade on 11/11/22, with marchers traveling along Main Street from Benoit Square to Fairhaven High School for a short ceremony.

At FHS, keynote speaker, veteran Dorothea Machado, 99, told the story of her entry into the military with humor and heart. She said she wanted to be a stewardess (the old word for flight attendant), but she was too short, by one inch.

She said she left one room and walked into another and saw a poster of Uncle Sam pointing right at her saying he wanted HER.

It turns out that Uncle Sam wanted women to serve stateside so men could go overseas. It was 1942 and WWII was raging. However, Ms. Machado was only 20, and she needed to be 21 or get a parent’s signature. She said her mother was from the Azores and never learned to read and write, so, Dorothea simply wrote her mother’s name in for her.

Before she knew it, she was in boot camp.

Ms. Machado called her rejection by the airlines the “biggest break I ever got.”

She wanted to travel, so she chose the Navy. Boot camp was tough.

“But I was quite happy I was releasing a man who had a desk job,” said Ms. Machado, achieved the rank of Seaman 1st Class and then Yeoman 3rd Class.

She did clerical work at stateside bases, but also achieved a security clearance necessary for her work.

But, she noted, a man was able to go overseas because she worked at a desk job.

“I did the right thing at the right time,” said Ms. Machado. “I love the Navy. And I’m very proud to be a veteran.” 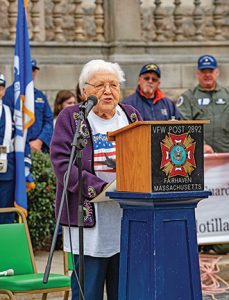 Veteran Dorothea Machado, 99, who served in the US Navy during WWI gives the keynote address after the Fairhaven Veterans Day Parade on 11/11/22. Photo by Glenn C. Silva for the Fairhaven Neighborhood News,

Ms. Machado took advantage of the GI Bill to get her BA in English from Suffolk University.

Select Board Chairperson Stasia Powers presented Ms. Machado with a proclamation from the town, a surprise to her.

The proclamation recounts her military service and says she paved the way for women  in the service by “her stellar example in WAVES (Women Accepted for Volunteer Emergency Services) long before women were allowed to go to war zones.”

The proclamation notes that Ms. Machado traveled extensively through Europe to see first hand the war’s aftermath and the rebuilding effort.

“She brought the skills she acquire and an expansive worldview back to her hometown of Fairhaven where she continues to be a positive influence on her community,” reads the proclamation.

At age 99, she walks almost daily at the Council on Aging and “inspires those much younger than herself with her self-sufficient, can-do spirit,” it reads.

All five Select Board members signed the proclamation that proclaims “our sincere appreciation to Dorothea Machado for her civic engagement and for the example she has consistently modeled to all our citizens by championing a better world for her country and her community.”

Ms. Machado seemed surprised to receive the proclamation form Ms. Powers. As she was away from the microphone, it was little hard to hear  her, but something about being 100 years old did come through.

Ms. Powers also delivered remarks, thanking veterans for their service and thanking organizers for planning and creating an “amazing event.”

She also thanked the families of veterans for their sacrifice, “for ensuring the freedoms we enjoy every day,” and wished thema “peaceful Veterans Day.”

The program also included music by the Fairhaven High School band; the Veterans Prayer read by US Navy Senior Chief Larry Jones, firing of the small cannon by the Fairhaven Village Militia, and the reading of the Governor’s proclamation for this year’s holiday read by Mr. Fish. Due to the threat of rain, organizers did not raise the “Big Flag” this year. 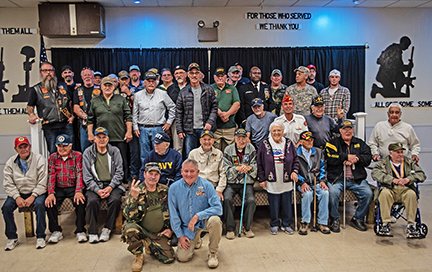 Veterans who gathered at the VFW in Fairhaven for a free lunch buffet after the Veterans Day parade, pose for a shot for the local free sheet on 11/11/22. Photo by Glenn C. Silva for the Fairhaven Neighborhood News. 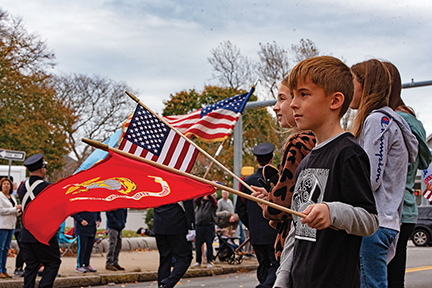 Siblings Hunter and Leah Dillon of Acushnet are among the many flag wavers lining Main Street showing support for veterans during the Fairhaven Veterans Day Parade on 11/11/22. Photo by Glenn C. Silva for the Fairhaven Neighborhood News. 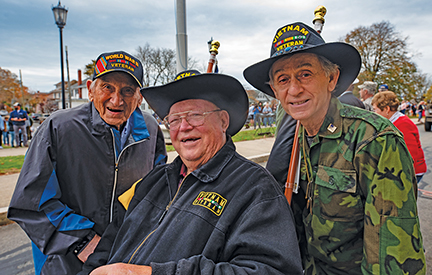 L-R John Koska a WW2 veteran, poses with Vietnam Veterans Rick Kowalczyk and Bob Silva, who went through basic training and served together in Vietnam from 1964-1970, after the Fairhaven Veterans Day Parade on 11/11/22. Photo by Glenn C. Silva for the Fairhaven Neighborhood News. 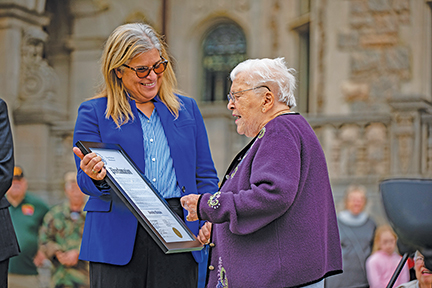 L-R: Fairhaven Select Board chairperson Stasia Powers presents a proclamation to Dorothea Machado, 99, for her service in the Navy during WWII, and for her civic engagement in Fairhaven, during the Veterans Day ceremony at Fairhaven High School on 11/11/22. Photo by Glenn C. Silva for the Fairhaven Neighborhood News.