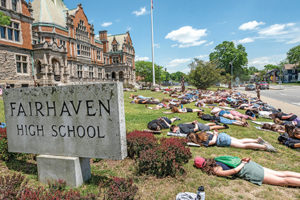 At noon, protesters, including some staff members, lay down with their hands behind their backs for eight minutes and 46 seconds on the front lawn of Fairhaven High School on 6/8/2020, during a Black Lives Matter protest organized by students who had just graduated from FHS this year. The 8:46 is the amount of time a white police officer in Minneapolis pressed his knee on the neck of George Floyd, who was Black, while he was on his stomach with his hands handcuffed behind his back, causing his death from asphyxiation. Photo by Glenn C. Silva for the Neighb News.

A protest organized by graduating seniors from Fairhaven High School ended up getting  emotional at the end as people began to speak about their own experiences with racism, and with fighting racism.

The Black Lives Matter protest, held on the front lawn of FHS, drew about 100 people and included a “die-in” with the protesters lying on their stomachs with their hands behind their backs, the position that George Floyd was in when a white Minneapolis police office put his knee on Mr. Floyd’s neck for almost nine minutes, killing the African American man, even as he told officers he could not breathe. The incident prompted protests throughout the country, for the last three weeks, prompting some police officers, including in Fairhaven, to “take a knee” with protesters. Some protests have descended into looting and chaos, prompting more charges of police brutality.

Locally, marches and protests have been held almost daily in New Bedford, and have also been held in surrounding communities.

The FHS protest came about after the school sent an email to students in support of the Black Lives Matter movement.

Mackenzie McCree, one of only a handful of Black students at the school, and a graduating senior, sent an email back recounting some painful experiences she had at FHS over the years. She asked that the email, with links to some petitions, be sent to students, but the school refused to send it.

Ms. McCree asked several of her friends to try, but the school would not forward her email.

In her email, Ms. McCree said that “our school has never showed me that my voice or life mattered.”

Right from freshmen year she said the school did nothing when students were making jokes about “turning into a black person,” even after her mother notified the school.

In another incident, she was included in a racist video. When her mother notified the school, Ms. McCree said that she got blamed, and the two students who made the racist video were not disciplined.

The email recounts incidents of the n-word being used and screamed out at events, all with no accountability.

The protest was organized as a direct result of the exchanges.

Students had a variety of opinions on whether or not staff members were sincere, of course, but students and at least some staff members, most notably Ms. Millette and Secretary Kerrie Oswald engaged in real dialogue on the lawn as the event came to its conclusion.

“It’s about murder, it’s about violence. And nobody’s doing anything about it,” said one white woman in  tears. “I’m so tired of being quiet.”

She said saying all lives matter misses the point and is hard to explain to people. Of course all lives matter, but if you go to a breast cancer march, people do not say colon cancer matters. Because if they did, people would shut them down.

“Because it’s not about you right now,” she said.

She also said she never felt so un­comfortable with some of the conver­sations, and her physical limitations making things difficult as she marched and protested in recent days.

“You get it, you get it,” came calls from the crowd.

During the event, Ms. McCree (who provided the Neighb News with a copy of her remarks), told the crowd how she tried to get her original email sent to the students of the school, but was unsuccessful in getting the adminis­tra­tion to forward her request.

“Yes, they did try to contact me and wanted me to join a Google Meet,” said Ms. McCree. “But I’m tired. As a Black student it is not my responsibility or job to explain to grown adults, let alone staff members in charge of a high school, how to not be racist or ignorant. I already had expressed my emotions, my experi­ence, and that was that.” 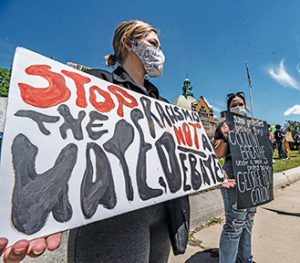 About 100 people gather on the lawn of Fairhaven High School for a Black Lives Matter protest on 6/8/20, organized by students who have just graduated from FHS this year. Photo by Glenn C. Silva for the Neighb News.

She said students who are “problematic” are not being educated  and are allowed to continue their behavior. She said she publicly called out a student who said systemic racism does not exist. She called them a “white supremacist,” and they called her “childish” and “intellectually deficient.”

“Simply because I refused to argue with someone who would not listen to a Black person’s perspective, a Black person’s voice,” she said. “They said ‘facts don’t care about your feelings and the fact is that America isn’t systematically racist anymore,’ but provided no evidence.”

“Again, I shared this experience to show you and the administration here that there are students attending this school who act like this and view others as inferior,” said Ms. McCree. “So now I want to say to the administrators here today: actions speak louder than words. Rather than write a half-assed email about your alleged support to BLM, which was obviously to try and make yourselves present well to your students and their parents, listen to your students of color more. Punish those who have treated your students of color wrongly based off the color of our skin. Teach us more about Black history, instead of glazing over it. Teach students about the various types of racism — yes even micro aggressions — and how to be useful/ supportive allies.”

The group then got on their stomachs for eight minutes and 46 seconds, the amount of time that Mr. Floyd was on the ground with the police officer’s knee on his neck.

After the event, Ms. McCree and Jewelya Sousa, who is white, seemed to have mixed feelings about the event. They believed they made progress with some school staff, but not others.

They said Mr. Kulak stood with the police officers, while Ms. Millette sat on the ground with students, a stark visual that was more than symbolism to the students.

Ms. McCree said she would like to see the school add more Black History to the curriculum.

“They still glaze over Black History,” she said, adding that she learned about several key events in Black History on her own.

Ryan DeVincent, who is white and graduated from FHS this year, said he was more impressed with Ms. Oswald speaking up, because she is usually so quiet.

Ms. Sousa’s younger brother Jamesyn, 15, who will be attending FHS as a freshman in the fall, joined the conversation. They talked for a bit about who spoke, what they said, and their hope that they may have made a difference on that day.

They all voiced their disappoint­ment that Fairhaven police officers would not “take a knee” when Ms. McCree asked them to. 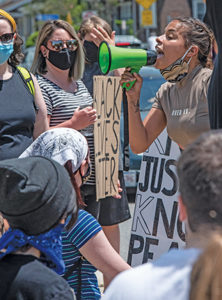 Shakira Duarte uses a megaphone to talk about the inequalities in today’s society at a Black Lives Matter protest on 6/8/20 in front of Fairhaven High School, organized by students who have just graduated from FHS this year. Photo by Glenn C. Silva for the Neighb News.

They also said that several people driving by made derogatory remarks, and one had to be asked to move along by police.

In a follow-up email, Mr. Kulak said that all three administrators attended for the duration of the event to support students and their reasons for holding the event.

“We are proud of and respect our students for the fact that they spoke up for change in our nation, our communities, and in our school,” wrote Mr. Kulak in a statement. “We heard powerful stories on our front lawn and are motivated to embrace the call for action.”

Ms. Millette said she was there, “among the crowd to support our amazing students.”

Mr. Kulak agreed, writing: “We all feel our students are amazing. They are special and deserved to be listened to.”

See page 9 for details on a BLM march that will begin in Acushnet and march into Fairhaven on Saturday morning.