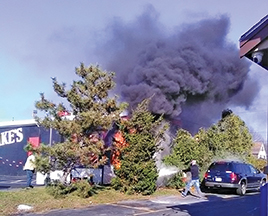 A man uses a hand held fire extinguisher to try to put out a fire at Jake’s Diner on 11/12/18. Photo courtesy of Kevin Miller.

The Fairhaven Fire Department responded in force to a report of a fire at 4 Misty Bay Road on West Island on Saturday, 11/10, that turned out to be flames coming out of a pipe.

And on Mon­day, 11/12, the department quickly knocked down a fire at Jake’s Diner at 102 Alden Road.

According to a press release by the Fairhaven Fire Department, the fire at Jake’s heavily damaged the back loading deck of the restaurant. The FFD received the call around 1 p.m. and responded with two engines and a ladder truck. 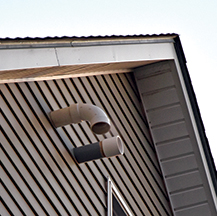 A neighbor saw flames coming out of the straight pipe on this house at 4 Misty Bay Road on West Island in Fairhaven on Saturday, 11/10/18, prompting a response by the fire department. Photo by Beth David.

“When crews arrived they found heavy flames on the back of the building involving the back stair and loading deck of the one-story diner,” said the statement. ‘Patrons were evacuated and no injuries were re­ported. The fire was quickly extinguished within 20 minutes.”

Kevin Miller was driving by when he noticed the flames and caught a picture of someone trying to put the fire out with a hand held fire extin­guisher before the fire department arrived.

He said the he and his companion noticed a little black smoke from the diner roof.

“As we got closer the smoke became really thick and black and we could see flames shooting over the roof of the diner,” wrote Mr. Miller in an email.

Around the back they witnessed flames “shooting out from the back of the restaurant.”

The cause of the fire is still under investigation, but discarded smoking materials were noted as a “possible cause” in the press release.

The business is owned by Matthew Gamache and the building owner is Tom Guard of Guard Oil in the same plaza. Damage to the property was estimated at $10,000.

At the West Island call, a neighbor noticed that flames were coming out of a straight pipe that protruded from the back of the building, near the top of the two-story residence. The FFD responded with at least two fire trucks and a ladder truck. 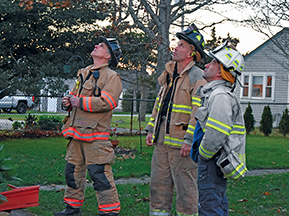 Fairhaven Fire Department Deputy Fire Chief Todd Correia (RIGHT), Lt. Douglas Silveira and Lt Paul Correia keep their eyes on a pipe at a house on Misty Bay Road that reportedly had flames coming from it on Saturday, 11/10/18. Photo by Beth David.

When crews arrived there were no flames, no smoke, and seemingly no fire.

Deputy Fire Chief Todd Correia said they “narrowed it down” to the exhaust from a propane-fire heater.

“The exhaust, which is heated, interacted with cold air when it was exhausted. The condensing of this air and the sun light gave the appearance of fire shooting from the propane,” said Mr. Correia in an email.

He said the call was made with good intentions. The department urged the owner to have his propane burner inspected to be sure it is working properly.

According to online town records, the property is owned by Jurrinus and Geraldine Ten Brinke