At 7:22 on the morning of 3/1/20 the Fairhaven Fire department received a notification that there was an oil spill in the area of 50 Fort Street, Fairhaven Shipyard. On arrival they encountered a large oil spill of unknown quantity but estimated to be over 200 gallons. The spill predominately located from Fairhaven Shipyard north to Linberg Marine. Fairhaven Harbormaster responded along with Department of Environmental Protection and the United States Coast Guard.

Fairhaven Fire Department and Harbormaster deployed absorbent boom and Sweep boom to collect the initial product that could be recovered. DEP contacted Frank Corp to respond and mitigate and recover the product. USCG arrived on scene and oversaw the collection of the product by Frank Corp. The source is unknown. 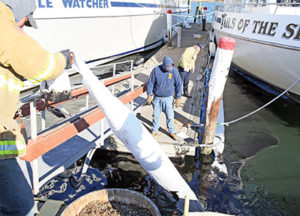 Fairhaven fire officials resond to an oil splll of more than 200 gallons in the New Bedford-Fairhaven Harbor on 3/1/20. Photo submitted by the Fairhaven Fire Department. 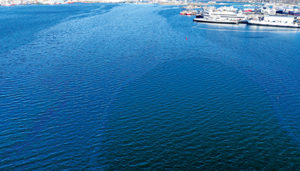 An oil splll of more than 200 gallons creates a sheen on the water on the Fairhaven side of the New Bedford-Fairhaven Harbor on 3/1/20. Photo submitted by the Fairhaven Fire Department.