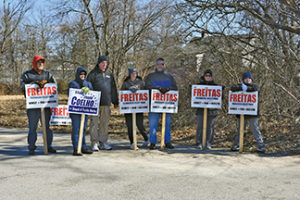 Supporters of Dan Freitas (third from right) and Frank Coelho hold signs at Elizabeth Hastings Middle School, the polling place for precincts 2 and 3 in Fairhaven, on election day, 4/1/19. Mr. Freitas won re-election to his seat on the Selectboard. Photo by Beth David.

Fairhaven had three contested races in this week’s election, with incumbents easily winning re-election in the Selectboard and Housing Authority races. For the open seat on the Board of Public Works, newcomer Frank Coelho was top vote-getter over Al Martin, whose bid for the BPW last year ended in a tie and a court case, with Mr. Martin with­drawing in the end.

Just a tad more than 10% of registered voters headed to the polls, definitely better than last year’s 6.24%. That 2018 ballot had only one contested race for BPW.

While the votes were tallied up, after the polls closed, candidates and their supporters gathered in town hall for a traditional event held by the Government Access Channel, 18, giving all candidates, win or lose, a chance to address voters.

Moderated by Selectboard mem­bers Bob Espindola and Charles K. Murphy, Sr., the two played a Fairhaven trivia game and tried just to gab while waiting for the results, with about 30 people joining them in the Banquet Room. 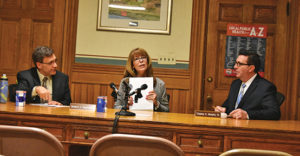 Fairhaven Selectboard members Bob Espindola (LEFT) and Charles K. Murphy (RIGHT) listen as newly elected Town Clerk Carolyn Hurley addresses voters after the election on Monday, 4/1/19. Ms. Hurley was unopposed running for the seat she had been appointed to on an acting basis after the previous clerk retired. Photo by Beth David.

Mr. Murphy thanked everyone who ran, noting that running for office is “quite an undertaking” and “a lot of work.”

Mr. Freitas, flanked by his two daughters, noted that his oldest daughter was able to vote for the first time.

“I’m pretty sure she voted for me,” he said.

Mr. Freitas thanked the voters and the volunteers. He said he appreci­ated the questions and issues that people brought up throughout the campaign.

“I heard what they voters had to say at these debates,” he said. 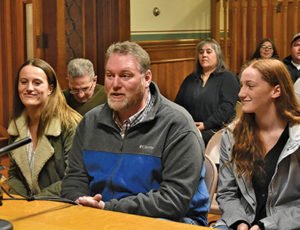 Fairhaven Selectboard member Dan Freitas speaks to the voters after his decisive re-election win on Monday, 4/1/19, with his daughters Cassie (LEFT) and Lacey (RIGHT) by his side. Photo by Beth David.

Ms. Plante thanked everyone who voted for her, saying she did her thing.

Ms. Plante, who is on the appointed Finance Committee, said she will stay involved in town government. 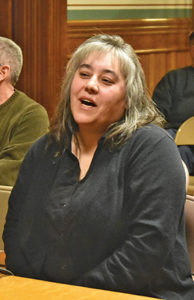 Lisa Plante addresses the voters at Fairhaven Town Hall on Monday, 4/1/19, after losing her bid for a seat on the Selectboard. Photo by Beth David.

“Because I love the town,” she said, and thanked everyone who voted for her, and congratulated Mr. Freitas.

Mr. Coelho thanked voters, his volunteers, and all those who allowed him to place signs in their yards. He also thanked Mr. Martin for bringing up the issues he did during the campaign, and said he would be giving Mr. Martin a call to talk about them some more, adding that he believed he could use Mr. Martin’s help.

Mr. Martin thanked everyone who voted for him, and said he tried last year and this year and, “It didn’t work out.”

He also told Mr. Coelho that he will be available to help out.

Mr. Murphy said the reaction of the two BPW candidates showed “Fair­haven at its best.”

He said it showed great leadership for the town that the two were willing to work together. 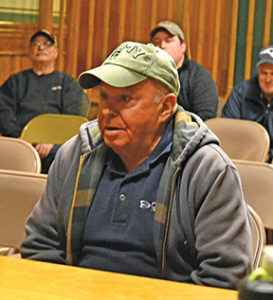 Frank Coelho addresses voters at Fairhaven Town Hall on Monday, 4/1/19, after winning a seat on the Board of Public Works. Photo by Beth David.

In a follow-up interview, Mr. Coelho said Precinct 5, the precinct he lives in, was a big win for him at 174 to 63. He the candidates night on West Island was a “turning point” for him.

He said he felt very happy with his win, and reiterated that his problems with Mr. Rees probably helped him get elected, although not on purpose.

“I wanted to throw him a shot any­way,” said Mr. Coelho with a chuckle.

The Fairhaven Housing Authority also had a contested race, with long time incumbent Anne Silveira winning over challenger Nicholas Sylvia 784 to 277. Ms. Silveira did not go to town hall on Monday night.

Mr. Sylvia did address voters, saying he could not have lost to a more devoted and caring person.

Mr. Espindola said that people should realize that when there is a contested race, there are people who voted for both candidates. He said the winner needs to recognize that there is a 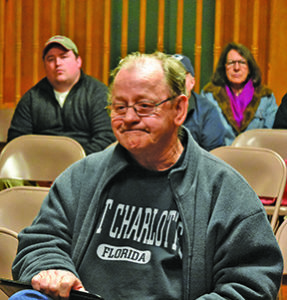 Albert Martin addresses voters at Fairhaven Town Hall on Monday, 4/1/19, after losing his bid for a seat on the Board of Public Works. Photo by Beth David.

“significant” portion of the electorate who voted for the person who did not win. Elected officials need to do the best they can for the entire community.

In a follow-up interview, Mr. Sylvia said he was very happy with the experience of running for office and being part of the democratic process.

“I always wanted to nudge myself to get into politics,” said Mr. Sylvia, but never thought he would “pull the trigger,” to be on the public stage.

“I’m happy I did,” he said. “It was a great experience getting feedback from the public. I can take all that to my professional life and future political endeavors.”

So, does that mean we will see him again?

School Committee incumbent Stasia Powers ran unopposed for her seat. She said it was a “great time” to be on the school committee because the schools are doing “really well.” 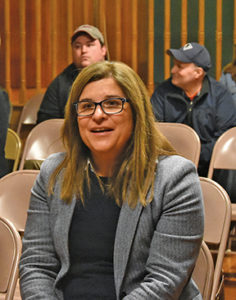 Stasia Powers addresses voters at Fairhaven Town Hall on Monday, 4/1/19, after winning re-election to the School Committee in an uncontested race. Photo by Beth David.

Also for School Committee was a blank spot that Kyle Bueno ran a write-in campaign to win. He got 277 write-in votes.

Mr. Bueno told voters it was the “biggest honor” to serve on the committee, and promised to listen to people.

“I am so honored and thrilled to hold this position,” said Mr. Bueno.

Carolyn Hurley ran unopposed for Town Clerk, a position she held was appointed to in an acting capacity after Eileen Lowney retired.

Ms. Hurley said she was “very proud to hold the position.”

She said she was excited and “a little nervous,” too.

Peter DeTerra won another term on the Board of Health, and also faced no opposition. He said people showed that they trusted him when they voted for him and he thanked them for their vote and their trust. 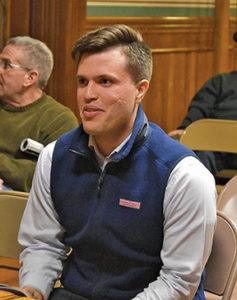 Kyle Bueno addresses voters at Fairhaven Town Hall on Monday, 4/1/19, after winning a seat on the School Committee with a write-in campaign. Photo by Beth David.

Other positions that were decided on Monday were: Barbara Acksen, re-elected Commissioner of Trust Funds; Rene Fleurent and Wayne Hayward, both incumbents re-elected to the Planning Board.

The election night coverage by the Government Access Channel should is available on Channel 18 and at https://livestream.com/fairhavenlive/events/7223638/videos/189474701

*All numbers are preliminary, results were not certified by press time.