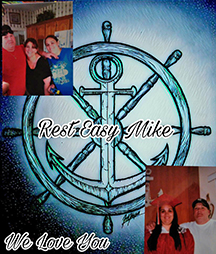 A New Bedford and Fairhaven based clammer, the 69-foot “Misty Blue,” sank 10 miles southeast of Nantucket on Monday evening, 12/4/17. The United States Coast Guard received a distress signal at 6:10 p.m. from an EPIRB (Emer­gency Position­ing Indicating Radio Beacon). There were four crew members on board.

The F/V Enterprise rescued the captain and one crew member from the water and transferred them to the USCG Cutter Steelhead.

The USCG and private vessels searched through the night and all day on Tuesday looking for the two missing fishermen.

At about 2:30 on Tuesday, the wreckage was found, but there was no sign of the two missing crew­members, identified as Fairhaven resident Michael Roberts, 49, and Jonathan Saraiva, 32.
Mr. Roberts’ wife Tammy spoke to local news outlets early on Tuesday, saying she still had hope that he would be found. She told channel 7 news, WHDH, that Michael was seen in the galley putting on his survival suit when the boat rolled over.

The boat usually docked at Linberg Marine in Fairhaven, but its registered port is listed as New Bedford. 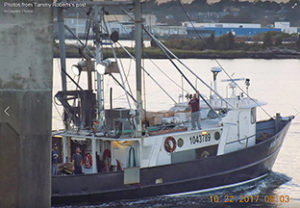 Mike Roberts waves from the bow of the Misty Blue as it returns from a trip in October. Photo from Tammy Roberts Facebook page.

The survivors, Colby McMullen, 22, and Captain Eric Arabian, 44, stayed with the USCG boat during the search on Monday night.

At 8 p.m. on Tuesday, the Coast Guard sus­pended the search for the two men. The Coast Guard, along with state and local agencies and good Samaritans searched for 42 asset hours saturating a 1,605 square nautical mile area, according to a USCG press release. Eleven vessels and aircraft were used in the search, including two fishing vessels that were in the area.

Accord­ing to a statement by Atlantic Capes Fisheries, which is affiliated with the Misty Blue, the boat left Fairhaven at 9 p.m. on Saturday to harvest surf clams (sea clams). It was in Nantucket Shoals with four other surf clam vessels when it rolled over around 6:30 p.m. on Monday. The Captain of the F/V Enterprise noticed the lights of the Misty Blue going out and steamed over to investigate.

The F/V Mariette retrieved the Misty Blue’s life raft with no one inside, according to the statement.

The two surviving fishermen were off-loaded at Linberg Marine on Tuesday and were transported to St. Luke’s Hospital where they were evaluated and released.

Michael Roberts lived in Fairhaven with his wife Tammy. Jonathan Saraiva lived in New Bedford, accord­ing to his Facebook page, and Mr. McMullen also lives in New Bedford. It was unclear by press time where Mr. Arabian lives. 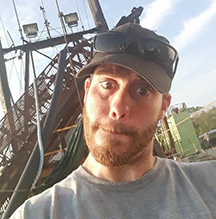 Jonathan Saraiva, 32, of New Bedford, is presumed dead after the clamming boat, Misty Blue, rolled over while fishing Nantucket Shoals on Monday, 12/4. Photo from his Facebook page. 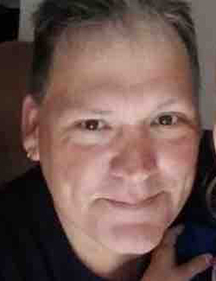 Mike Roberts, 49, of Fairhaven is presumed dead after the clamming boat, Misty Blue, rolled over while fishing Nantucket Shoals on Monday, 12/4. Photo fro ma GoFuneMe page set up for his family.

A family friend set up a GoFundMe page for the Roberts family at: https://www.gofundme.com/4tffqo8

On Facebook, Kalie Brum, Mike’s stepdaughter wrote: “I know I never expressed this to you and I will always have regrets but thank you Mike for being a positive father figure in my life and my sister and brothers and showing me that not every guy is an asshole may you rest easy now and watch over us.” •••