The Fairhaven Animal Control Officer and Animal Shelter volun­teers, went directly from the sad loss of a dog named Angel that had been abandoned and had cancer, to finding two dogs that were also sick and will require expensive treatment.

The shelter posted on its website that Angel had died from her cancer, and then posted that the two dogs named Logan and Taylor that were found roaming in the woods, were very sick. 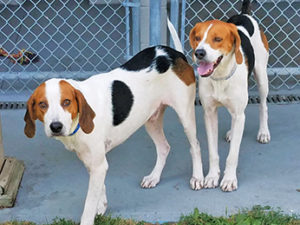 “As this horrible week comes to a close we were hit with some more devastating news,” reads the Facebook post. “When we took Logan and Taylor to the vet this morning to be neutered we got some very surprising results. When you combo test for a dog it tests for four things, heartworm disease, lyme disease, ehrlichiosis, and anaplasmosis. Never in the history of the veterinarians we see and with the Fairhaven Animal Shelter have we ever had a dog test positive for all four. Well we’re going to go play megamillions today because they both tested positive for all four.”

The diseases mean the dogs will be at the shelter for at least four months during treatment.

“This a long and expensive process that costs roughly $1,000 per dog,” reads the post. “We are looking at $2,000 for veterinary expenses when our adoption fee for both dogs wouldn’t even cover the treatment for one dog.”

The good news, reads the post, is that the dogs have a good chance of 100% recovery and will be ready for adoption after treatment.

“Everyone was rallying together and asking how to help Angel,” reads the post. “Well the good news is in her memory we can all help Logan and Taylor.”

The shelter will accept checks or money orders made out to the “Fairhaven Animal Shelter,” 200 Brdge St., Fairhaven, MA 02719. The money will go into the gift account which is used for a variety of shelter needs, including medical care.

“We want to thank everyone for the support this week and we are thankful we get to spoil Logan and Taylor with love and cuddles during this hard time,” reads the FB post.