He was a natural comedian, a good writer, a creative mind, a kind-hearted soul, who simply did not understand how his absence would empty out the souls of those who loved him.

“Everyone loved Nick, except Nick,” said Mike Coutinho about his son Nicholas, 33, who took his own life just a month ago. His body was found in the gazebo at Fort Phoenix on August 5. 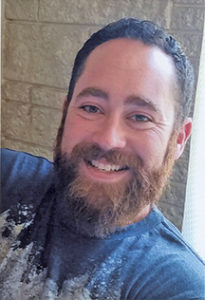 Nick Coutinho, who killed himself at the age of 33, on 8/5/18 in Fairhaven, gives a smile to the camera. Family photo submitted.

“Why don’t you write about how the world is a lesser place without him,” asked Mr. Coutinho after reading the article in the Neighb News about Nick’s death.

“Everyone loved Nick,” repeated his father. “The only person who didn’t love him was himself.”

Nick’s mother Susan left the press interview to her husband.

“To me, it’s about aware­ness,” she said, awareness of the disease of depression, mental health disorders, suicide prevention. If the paper wants to write about that, she’s okay with it.

It’s the reason they acknowl­edged in his obituary that he took his own life. It is not a failing of the person who suffers, it is a disease, and needs to be treated as such, by the person who is sick most of all.

And it has nothing to do with upbringing, the family, or the neighborhood.

“There was no drunkenness, hate or violence in this house,” said Mr. Coutinho. “He only saw love.”

“It was almost like two different personalities you saw,” said Nick’s sister Liz Pereira. “One was funny, lighthearted, and would drop anything in a second to help people.”

He was also a “walking Google,” who knew about everything, was beyond smart, and would figure out anything complicated to help a friend.

“He was my protector, my big brother,” said Liz. “He was a nice person to be around.”

The other Nick, though, the one behind closed doors, was a tormented soul.

“Every day was a struggle for him. It was awful, because he saw somebody so different than what we saw,” she said. “I just wish Nick saw himself the way others saw him. I wish he could see himself through my eyes, as his little sister.”

Nick never did drugs, not even to self medicate, a fact that still surprises his sister. 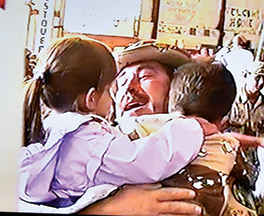 A picture from a video shows Mike Coutinho greeting his daughter Liz and his son Nick in 1991 when Mike returned from Saudi Arabia after serving a tour with the 115th Military Police Detachment. Photo by Beth David.

“He was just a good kid,” said Mike

He has a video of his return from Saudi Arabia after serving a tour in Desert Storm with the 115th Military Police Detachment. In the video, family waits anxiously for Mike to get off the plane. And when he does, he lifts his son and his daughter and holds them both as closely as can be.

“I just want you to see the kind of relationship we had,” said Mike, watching himself hold his five-year-old son and his three-year-old daughter.

Nick was 14 when he was first diagnosed with bi-polar disorder.

Mike said he noticed that Nick was wearing long sleeves in hot weather. Being a Corrections Officer with a variety of different trainings under his belt, Mike knew it was not a good sign. He forced Nick to show his arms.

They were all cut up.

Nick had been hurting himself.

That began a nearly 20-year battle trying to treat Nick’s depres­sion, and hiding every sharp object in the house.

“It’s hard, because you want the person to be around to ask them ‘why didn’t you reach out for help,’” said Liz. “Or what was going through their mind, or to tell them you can get through this, we can help you.”

“He just felt alone that night,” she said. “He must’ve felt so alone.”

Mike spoke often with Nick about his disease. Nick didn’t like taking certain medications, and it took a long time to find the right one.

He told his father they made him feel like a “synthetic person.”

“I told him, would you tell a diabetic not to take his medicine,” asked Mike.

Nick worked while he could, and did well, off and on. But then he would have a “melt down,” his father said, and lose the job. 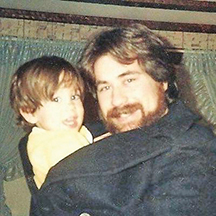 In this old family photo, Nick Coutinho is cozy inside his father Mike’s coat. Photo submitted.

He worked for awhile managing a TMobile store and did really well. Then it fell apart. That was a few years ago. Most recently, he had signed up for computer courses at Bristol Community College, was enrolled to start this month, had paid up and everything.

“He was just a kid who wanted to be normal,” said Mike, who really believed Nick had a chance to become a writer. He played guitar, too, showing a variety of creative abilities.

“He was wonderfully creative,” said Liz, who was looking forward to telling him he was about to become an uncle again. She was going to ask him to help with her “gender reveal” announcement because of how creative he was.

“Now, it’s like I don’t even want to do anything for it,” said Liz.

She never even got a chance to tell him she was pregnant.

“It makes me said he won’t meet this niece or nephew,” said Liz, adding that her daughter will miss her uncle, especially around Christmas.

“I don’t know Christmas without my brother.”

“We had such a special bond,” said Mike. “I tried to protect him his whole life. But he was in so much inner turmoil.”

The weirdest part of it all, it seems, is that Nick was quite the comedian, the life of the party, the guy who just “made everybody laugh,” said his father.

Nick was quick-witted, and very giving.

Mike told the story of the two of them stopping to help an elderly man change a flat tire, when Nick was only in his teens. It felt good to help.

“I told him that’s what life is all about,” and emphasized he should not feel guilty for feeling good about it.

When Liz would go out with her friends, the first thing they wanted to do was text Nick to get him to join them.

“He was the light of the party. He kept everybody laughing,” said Liz. “A lot of people are broken up.”

Mike admitted, though, that Nick could be pretty “nasty” when he was “on the other side of it.” But he was a great kid, normal, played sports growing up,

His two sides were polar opposites, just as the name, “bi-polar” suggests.

Nick even wrote an essay titled, “The Twisted Joke,” that is all about how laughter helped him escape the dark places.

In it, he is honest about battling depression and anxiety.

“It’s just one of those physiological miscalculations I was born with and remains out of my control,” he wrote. “My father would often recognize the patterns of my depression, and find ways to help me snap out of it. One of the most helpful habits he found was to get me laughing.”

He notes that his father would even “make a complete fool of himself in public just to give his son a fleeting moment of happiness.”

It worked, too, said Nick in his writing. He became a class clown. His friends enjoyed his humor and he enjoyed making them laugh.

“Most comedians have a history of mental disorder,” wrote Nick. “In a twisted sort of way, this is what makes them funny. They possess the ability to find humor in things others wouldn’t consider funny.”

It’s two sides of the same coin, the deeper the depression, the bigger the ability to enjoy laughter.

“I’ve always found that incredibly bizarre, but have come to embrace it,” he wrote.

In the essay, he says that laughing at dark, sad things is not a negative trait, it allowed him to be there for his friends in bad times.

“The only real way I can describe it is to imagine the overwhelming darkness as an adversary,” wrote Nick. “Amidst the battle between you and it, you look up and you simply laugh.” 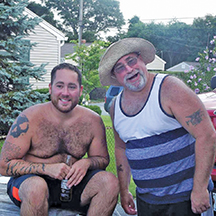 In this more recent picture, Nick Coutinho (LEFT) and his father Mike, show they still share the bond they had when Nick was a child. Nick’s suicide on 8/5/18 in Fairhaven, has left the family heartbroken. Photo submitted.

Mike can’t believe that he won’t go fishing with his son anymore, and that he and his wife will be playing with their granddaughter, but without Nick there to enjoy the little moments with them.

“He was just a big-hearted kid,” said Mike. “I want parents to know, the danger of suicide is real. Don’t think they will fight their way out of it.”

“As a family, you’re just tormented every day with ‘what if,’” said Liz. “What if he had reached out. What if…”

She said he did text her in the wee hours that day, but she didn’t get the text until she woke up the next morning. Their friend, who was with Nick that night, did not notice anything unusual about his mood.

“It breaks my heart to think he sat there crying hysterically if he should do it or not for two hours,” she said. “You think the opportunity will come to help. Your mind doesn’t click that it’s over. It’s done with. You can’t help anymore. You’re tormented every day.”

“There’s such a hole in my heart,” said Mike.

You may also donate to the Jason Foundation in memory of Nick at http://jasonfoundation.com