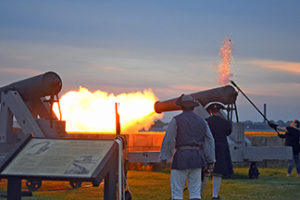 Cannon # 2 fires at dusk on 5/26/18, at Fort Phoenix in Fairhaven during the annual Revolutionary War Encampment. Photo by Glenn C. Silva.

The Fairhaven Village Militia, the Wareham Minutemen and the Fairhaven Office of Tourism held their annual spring Revolutionary War Encampment at Fort Phoenix on Saturday and Sunday, 5/26 & 27.

Men and women in period dress lived as the soldiers from the revolutionary war lived, using the same tools and equipment that they would have used. Children’s games, cooking demonstrations, tin smithing, leather working, and musket firing filled the day.

On Sunday, the camp got washed out, but Saturday saw big crowds, especially for the firing of the fort’s five cannons at dusk. 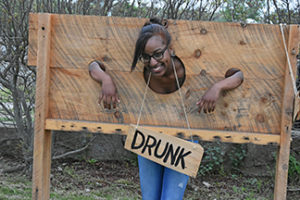 Jasmin Delbois of New Bedford tests out the pillory at the annual Revolutionary War encampment at Fort Phoenix in Fairhaven on 5/26/18. Photo by Beth David.