This weekend is Memorial Day weekend, and the beginning of summer festivities. Fairhaven and New Bedford both host parades on Monday, and the annual spring encampment will be held at Fort Phoenix. Also see pages, 5, 8, 9 and 22 for more activities. 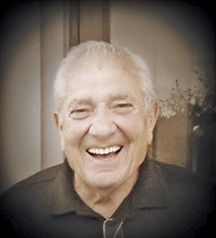 Boy Scout Troop 52 will raise the flag at Fort Phoenix on Monday, 5/28.

The flag will be raised at 7 a.m., brought to full-staff, then to half-staff by the Boy Scouts. Mikayla Mooney will sing the national anthem.

At noon, the Boy Scouts will raise the flat to full staff.

At 5 p.m., the flag will be lowered, folded, and presented to the family of Michele “Mike” Costa. 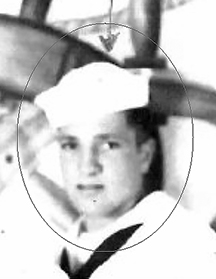 Mike joined the Navy in Springfield, Mass. on July 13 , 1950, at the age of 18. He did his initial indoctrination training at the Recruit Training Command, Great Lakes (RTC Great Lakes), Illinois. After boot camp, Mike attended the Underwater Demolition Team Basic Training.

He served for three years, nine months and 23 days and was honorably discharged as a Boatswain Mate 3rd Class on May 5, 1954. He spent more thatn two years, seven months in foreign service/sea duty.

Commendations include the Navy Occupation Medal (Europe) and National Defense Ribbon Korean Theater. His last duty station prior to discharge was the USS Macon (CA-132), a heavy cruiser.

Monday, May 28, at 8:30 a.m. Main Street, from Center Street north to Riverside Cemetery

The VFW, 109 Middle St., will welcome the public for free food after the ceremony.

Several events are planned in New Bedford throughout the upcoming Memorial Day weekend to honor the courageous men and women who lost their lives serving the United States.

This year’s Memorial Day com­memorates the centennial of the end of World War I in 1918. The Veterans’ Advisory Board has placed wreaths with red carnations, rather than the traditional red, white and blue, at all WWI memorials through­out the City. Of the nearly 90 wreaths placed across New Bedford in honor of Memorial Day, 11 are red at memorials and monuments marking WWI.

The Greater New Bedford Civil War Round Table will conduct a memorial exercise at the Union Soldier’s Burial Site at Rural Cemetery, 149 Dart­mouth Street. These services typically include historical reenact­ment, music and a gun salute.

New Bedford Post 1, The American Legion will conduct a Memorial Day Exercise at the Vietnam Veterans’ Honor Roll at New Bedford City Hall (133 William Street) on the William Street side of the building.

Veterans of the United States Marine Corps march along Main Street in Fairhaven on Veterans Day, 11/11/17. Photo by Beth David.

Advisory Board will conduct the New Bedford Annual Memorial Day Parade and Services. The Parade will form at 11:00 a.m. at the intersection of Parker St. and Hathaway Blvd and will step off at 11:30 a.m. The Parade will travel east on Parker Street to County Street, north on County Street to Pope Street, and east on Pope Street into Clasky Common Park where a Memorial Day Ceremony will be held.

The New Bedford Veterans’ Advisory Board and the New Bedford Office of Veterans Services invites anyone who attends the service in Clasky Common Park to bring a single flower of their choice to lay at the park’s memorials, in remembrance of a veteran family member or friend. 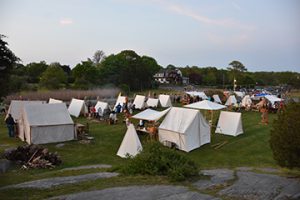 The Revolutionary War era will come to life again in Fairhaven during a two-day historical encampment scheduled for Saturday and Sunday, May 26 and 27, 2018 at Fort Phoenix.

During that weekend, members of the Fairhaven Village Militia, the Wareham Minutemen and Militia Companies, and the Fairhaven Office of Tourism will live in an authentic period camp the same way it was done 240 years ago.

Men, women and children dressed in period clothing will reenact life in 1778 and talk about the history of the fort. They will also be demonstrating campfire cooking, fire starting with flint and steel, musket ball casting, military drilling, loading and firing flintlock muskets and rifles, tin-smithing, leather working, sewing, cannon firing and more. The militia’s chaplain will deliver Revolutionary War period sermons. Visitors may try their hand at tomahawk throwing and children’s games of the period.

The highlight of the weekend will be the firing of the fort’s five large cannons, scheduled for dusk, approxi­mately 7:45 p.m., on Satur­day. When fired near sundown, the cannons’ plumes of flames and smoke make a spectacular sight.

This year the firing of cannon #1 will be done in memory of Lt. Earl M. Faunce, a retired fire fighter who passed away in February. Mr. Faunce was a member of the original 4th Old Dartmouth Militia established by Donald R. Bernard during the years leading up to the US Bicentennial. Two decades later, when the newly established Fairhaven Office of Tourism was planning its first Fourth of July parade, Lt. Faunce volun­teered to get the Fort Phoenix cannons inspected so that they could be fired again, something that had not been done since the early 1980s.

On July 4, 1997, he and Wayne Oliveira fired the cannons for the first time in many years. Since then, they have been fired every Fourth of July and at historical encampments and special events sponsored by the Fairhaven Village Militia.

The militia began as a small volunteer group in 1999, made up of local people who are interested in local history of the Revolutionary War period. The name Fairhaven Village Militia was adopted in 1993, the same year the first Fort Phoenix encampment was held. The group’s commander, Ellsworth Sylvaria Jr., is a descendant of Bartholomew West, whose home was burned by the British in 1778. Captain of Artillery Wayne Oliveira was originally a member of Donald Bernard’s Fourth Old Dartmouth Militia. There are high school age members who have been participating in the group’s historical reenactments since very early childhood.

“Since we started programs at the fort, thousands of people, including hundreds of school children, cruise ship passengers, visitors and local residents have visited us at Fort Phoenix,” says Tourism Director Christopher Richard. “They find our presentations are both educational and entertaining. The militia has also taken part in events in the surround­ing communities of Mattapoisett, Marion, Dartmouth, and Acushnet and at Fort Taber in New Bedford.

At the encampment, the group is depicting camp life during the Revolutionary War period. There will be regular demonstrations of military drilling and musket firing, but there will be no large-scale battle re-enactments.

Both the cannon firing and the overnight encampment will be cancelled in the event of heavy rain. Weather permitting, the militia’s camp will open to the public from 9:00 until sunset on Saturday and from 9:00 a.m. to 3:00 p.m. on Sunday.

For more information, call the Office of Tourism at 508-979-4085 or email Fairhaventours@fairhaven-ma.gov.