Alexis Andrews not only knows what makes America great, she knows how to put it into words for the rest of the world to see. The sixth grader at Elizabeth Hastings Middle School in Fairhaven took second place in the VFW Auxiliary’s annual Patriot’s Pen essay contest for students. Each year more than 100,000 students in grades 6–8 participate in the national contest. Prizes are on both a national level and a local level. 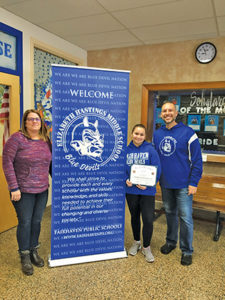 Ms. Andrews wrote that the “free­dom, our rights, and individuality unlike any other country,” are the things that make America great.

She cites the Pledge of Allegiance, and writes that the country has justice, and freedom, “and you can be who you want to be.”

“We are still always united,” she wrote.

In her essay, Ms. Andrews also discusses the women’s rights movement and the bravery of America’s soldiers.

“Our country is an amazing country, we have the bravest soldiers who fight for our freedom,” she wrote.

She noted that many other countries do not give people the “rights they deserve.”

She also shared with her readers that her father was in the Army for four years and was deployed to Afghanis­tan. She wrote that he was scared while he was deployed, and there were many times he could have gotten hurt.

“There are still so many reasons America is so great,” wrote Ms. Andrews. “We are so lucky and grateful that we live in an amazing place like the U.S.A.

Learn more about the contest at https://www.vfw.org/patriotspen