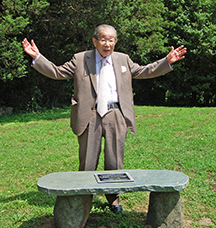 L-R: Dr. Shigeaki Hinohara, 100, opens his arms in his signature gesture while standing behind a bench dedicated to him at Cooke Park in Fairhaven. Dr. Hinohara, along with a delegation of about 30 Japanese travelers, were in Fairhaven on Tuesday, 8/14/12, for the dedication of 14 cherry trees donated by Dr. Hinohara. The trees symbolize a fresh start and were donated to strengthen the special bond between Fairhaven and Japan. Visit http://manjiro1.tripod. com/ for the story of Manjiro Nakahama and Capt. William Whitfield. Photo by Beth David.

It is with heartfelt affection and immense gratitude that the Whitfield-Manjiro Friendship Society notes the one year anniversary (July 18, 2017) of the passing of our incredible bene­factor, Dr. Shigeaki Hinohara, late President of St. Luke’s hospital in Tokyo, Japan.

His fame was known in many parts of the world long before he took on the task of saving the home of Captain William Whitfield who rescued Manjiro (Nakahama) in 1841 and brought him back to Fairhaven for his first school­ing ever. The house is now known as the Whitfield-Manjiro Friendship House Museum and has hosted more than 6,000 visitors (approxi­mately 70% Japanese) since its opening on May 7, 2009.

The spirit of Dr. Hinohara dwells therein and joins us as we convey the particulars of the long-enduring relation­ships between the Nakahama and Whitfield families and the strong bonds of grass-roots friendship shared by two cultures separated by half of the globe.

Dr. Hinohara’s legacy is part of every friendly relationship that is initiated or strengthened within the museum. May he rest in peace.