In what unfolded like an action scene, the Fairhaven Animal Control Officer, Terry Cripps, describes the unlikely rescue of a Yorkshire Terrier from the middle of the Harbor on Tuesday. Mr. Cripps said he got a call around 6 p.m. that two dogs were loose near Sycamore Street by Dattco Bus. 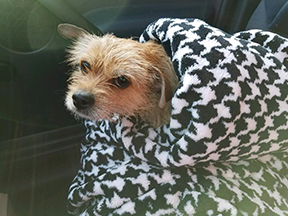 A little Yorkie warms up in the Animal Control Officer’s vehicle, after being rescued from the Acushnet River on Tuesday, 4/30. The lucky dog was scooped up out of the water by a man on a boat that was about to run the little guy over.

When he got there, some passersby had rescued one dog that had been hiding under a car, but the other one, the Yorkie, had bolted onto the bus company property. Mr. Cripps searched the property thoroughly, but could not find the dog. On the chance that it had fallen into the water, and to get a better angle, he went to the Coggeshall Street bridge and enlisted the help, or, as he put it, the “young eyes,” of a couple of teenagers. They spotted the little head bobbing up and down in the water about 150 yards from shore.

Mr. Cripps called the Harbor­master who started out to get his smaller boat, the one that can fit under the bridge. Meanwhile, a small boat and a larger boat were heading straight for the little guy.

Mr. Cripps said he managed to get the attention of the first boat, the smaller one, which only by luck missed the dog by about a foot. The larger boat, however, was heading straight for the seemingly doomed dog.

Mr. Cripps, the teenagers, and the man in the smaller boat all yelled and flailed their arms to warn the larger boat that they were about to run over the little guy.

“Literally, this dog was going to go under the boat,” said Mr. Cripps, adding that there was no avoiding it, the boat just could not maneuver around him.

“This big burly man hung over the side of the boat and picked it up as they were moving,” said Mr. Cripps. “It was crazy. I couldn’t believe it.”

He did not get any names of anyone, although he thanked them profusely, he said. He met them at Kyler’s Seafood to pick up  the dog.

“It was just so fast. They handed me the dog and headed to their cars,” said Mr. Cripps.

The little guy was shivering and very cold. Mr. Cripps took his sweatshirt off to wrap him up and took him to the Fairhaven Animal Shelter to be reunited with his housemate and get warmed up. Both dogs are now back with their owner.

“It’s a feel-good story,” said Mr. Cripps. “When that guy pulled him up, I couldn’t believe it. It felt pretty good to do that.” 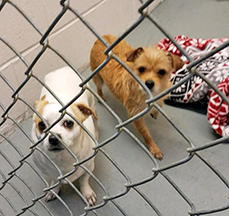 The Yorkie and his pal, who also got loose on Tuesday but had la ess eventful rescue. Photo courtesy of Terry Cripps.