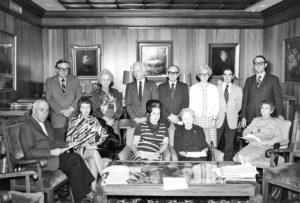 Dennis Duval stepped down December 8 after serving 50 years on the Millicent Library Board of Trustees. He was honored for his service at the December 21 meeting of the board.

Mr. Duval was applauded by his fellow board members for his five decades as a dedicated volunteer, including serving as board president. He also was recognized for his contri­bu­tions in proclamations from the Massachusetts House of Repre­sentatives and the Fairhaven Select Board.

During the celebration, board Treasurer Bob Kenworthy gave a “This is Your Life”-style presentation going back to Duval’s childhood living above the family business, Duval’s Pharmacy, a Benoit Square landmark for decades.

Mr. Kenworthy reviewed the honoree’s education at Fairhaven High School and Georgetown Univer­sity’s Walsh School of Foreign Service, his attendance in the Army Reserve Officer Training Corps at Fort Mead, Maryland, his career as a history teacher in Fairhaven schools and as a guidance counselor at a Rhode Island high school, his contributions as a volunteer in Fairhaven elementary schools, and his devotion to his family.

Not overlooked was Mr. Duval’s admiration for President Dwight Eisenhower and his fervent support of the Red Sox.

Mr. Duval said he was gratified “to have served with so many wonderful people on the board” and “with three excellent library directors” — Rita Steele, Carolyn Longworth, and Kyle DeCicco-Carey.

“I know the library is in very good hands,” Mr. Duval said. “After 50 years, I’ve reached my goal, and now it’s time for someone new, with fresh ideas, to take my seat. It’s been a very enriching experience to have served as a trustee.” 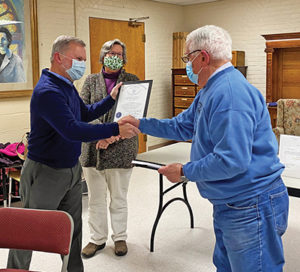 L-R: Millicent Library Board of Trustees treasurer Bob Kenworthy presents outgoing trustee Dennis Duval with a proclamation by the Fairhaven Select Board while board president Joanna McQuillan Weeks looks on at a celebration of Mr. Duval’s 50 years as a trustee on December 21, 2021. Submitted photo. 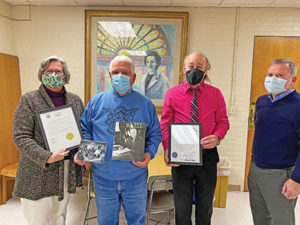 L-R: Millicent Library Board of Trustees President Joanna McQuillan Weeks, former trustee Dennis Duval, Board Vice President Bruce Bendiksen, Board Treasurer Bob Kenworthy, pose for a photo on December 21, 2021, after celebrating Mr. Duval’s 50 years as a trustee. He is holding a photo of the board in 1972, when he was first appointed, and a photo of his favorite US President, Dwight Eisenhower. Submitted photo.