Everyone, it seems, knows Delima “Del” Genard, the newly minted centenarian at Presidential Terrace. The perennially good-natured, smiling neighbor-to-all  celebrated her 100th birthday with a luau party and about 30 of her neighbors at the Nate Gomes Community Center on Saturday, 8/25. But that was after the big family bash where about 140  relatives and friends showed up. 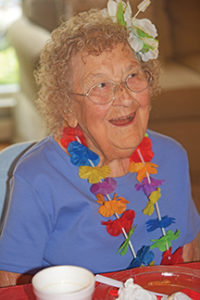 Delima “Del” Genard smiles while talking to a reporter at a party for her 100th birthday on 8/25/18 at the Nate Gomes Community Center at Presidential Terrace in Acushnet. Photo by Glenn C. Silva.

Ms. Genard, who has lived at the senior housing complex for 30 years, said she had no secret to living a long life and keeping such a positive attitude. She said she never drank much, just a little white wine every now and then. No special diet, either, although her daughters noted that she always had a bit of a sweet tooth, and she likes her red meat. And she’s sharp enough to correct someone who gives the wrong number of grandchildren she has.

Del said she is not much of a TV fan, although she likes her game shows. She loves her jigsaw puzzles, too. She has a big one on the table in her apartment. When people visit, they sit and work on it with her. She likes her word puzzles, too.

“I walk,” said Del, admitting, though, that she does not walk as far as she used to, since she has a problem with her leg, now.

She used to walk around the complex five times, which is a mile. Now, she walks around twice, but still tries to go twice a day.

“She’s the nicest person on earth. On earth,” said her neighbor Susan Perry with great emphasis.

“She’s kind to everybody,” said Isabel Sousa, an organizer of the party. “She doesn’t judge people and she’s always happy. She never complains.”

“She walks and walks,” said Joe Ponsart. “Not as fast as she used to.” 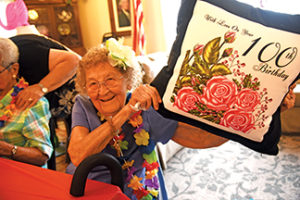 Delima “Del” Genard holds up a gift at a party for her 100th birthday on 8/25/18 at the Nate Gomes Community Center at Presidential Terrace in Acushnet. Photo by Glenn C. Silva.

“We see her coming with her walker, or her cane,” said Carol Cole, 65. “She looks so happy for 100 years old. She has a lot of friends that love her.”

“Every single day, without fail, a member of the family visits her,” said Ms. Perry. “Everybody loves her. It’s her goodness that has kept her alive.”

“She’s the nicest person at Presidential Terrace,” said Millie Almeida, who refused to give her age (“age is not important”).

Beatrice Vieira, 97 and just about to turn 98, said she has known Del for 30 years and they have become very close.

“She’s a wonderful person,” said Ms. Vieira. “I envy her because she walks every day and I can’t. I’m jealous. If we had more like her this  place would be wonderful.”

Jean Eaton, 75, said that when she first moved to the complex two years ago, it was who Del approached and introduced herself.

According to her daughters, Del is still self-sufficient, does a bit of her own cleaning in the apartment, with her little Dirt Devil vacuum and her Swiffer to make things easier.

“We don’t baby her,” said Florence, who admitted that her mother sometimes needed coaxing to get out on those famous walks of hers.

And she was always a walker, because she never learned to drive. 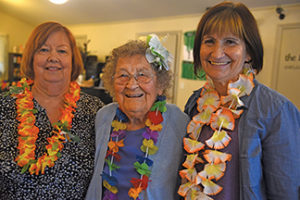 Sisters Priscilla Chasse (LEFT) and Florence DesRoches (RIGHT), pose with their mother, Delima “Del” Genard, at a party for her 100th birthday on 8/25/18 at the Nate Gomes Community Center at Presidential Terrace in Acushnet. Photo by Glenn C. Silva.

Del was an infant when she arrived in this country from Canada. She became a US Citizen in 1939. In 1941, she married Alcide Genard, and then became a single parent when he was called to fight in WWII. He came back from the war, but died from  a heart attack when he was only 48.

Del had left school early to work in the mills. She stayed at home while her children were young, then went back to work as a stitcher at Colonial textiles on Coggeshall Street in New Bedford, a place that made pajamas.

“We called them sweatshops back then,” she said, but insisted that Colonial was not a sweatshop com­pared to the others. “It wasn’t bad.

Most of her life, she loved dancing quadrille, a traditional dance that originated in France. She enjoyed whist parties at her church, movies, clambakes and going for long walks.

She moved to Presidential Terrace after she retired, and enjoyed the chance to play cards, bingo, doing her puzzles, and going on day trips with other Acushnet seniors.

Ms. Genard said she has no big plans for the future, but does have much to look forward to, like “more grandkids.”

Apparently, there is usually another great- or great-great grandchild on the way at any given time.

“There’s always a birthday,” said Del. “With 31 great grandchildren, there are a lot of birthday parties to go to.”