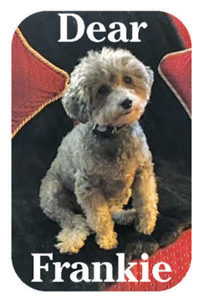 Frankie is an emotional support dog who gives advice to other dogs. Submitted photo. © 2021

Frankie is an eight-year-old schnauzer poodle and a rescue. She is a certified emotional support animal for a single retired educator. Together they have traveled and visited places far and wide. Over the years they have encountered and befriended many dogs and owners, from all walks of life.

Frankie thought it would be a waste not to share the lessons of life that she has learned from her many adventures as well as from other dogs. She created Dear Frankie as an advice column for dogs who would like a canine perspective, on their questions and issues of concern.

She also welcomes the advice of other dogs to the letters she has responded to in her column.

Frankie can be contacted at dearfrankiecolumn@gmail.com, and welcomes your submissions.

I am an eight week old puppy. Yesterday I was told I was going to be adopted by a couple with no children. I don’t want to leave my Mom and siblings, but my Mom told me I have no choice. I’m really scared about living with humans and don’t know what to expect. Can you tell me what it will be like?

I perfectly understand your anxiety about going to a human home. It’s unfortunate that no one explained to you that all puppies eventually have to leave their litter and live with humans. If they are really lucky, they get adopted by a family who wants a puppy and wants to love and care for them for their whole life. In the canine world, getting adopted by a couple without children is like winning the dog lottery.

So here are a few tips for living with humans. For starters, I know this is going to crack you up. They think they are your parents. Now even a dumb Bassett Hound knows they are not your parents. But here’s the thing, let them, and use it to your full advantage. Parenting you see, is the most competitive sport in America. So, they need you to make them look good.

After you settle in, they are going to teach you a few “commands”. I know they are not in the military and you are not a war pup, but that’s what they call them. As time goes on you will find that humans say and do a lot of strange things. Don’t give them much thought, most won’t impact your life.

The first command they probably will teach you will be to sit. Whatever you do, don’t sit unless they give you a cookie. Later, when they ask you to sit, pretend you don’t understand what they are asking you to do and see if they will give you two cookies. It worked for me because I live with a single Mom and she will do anything to make herself look good as a parent.

In sum Buster, I think you are in good hands and will live a great life. If you have any other questions, feel free to get in touch.