Old Sturbridge Village promises a trip back to 1830s New England and the farming life that goes with it. This past Saturday, 4/14, was our second trip to the village (see 3/17/16 issue), and we still did not see it all. We tried to visit different things this year, but made sure to visit the sheep again. This weekend we caught Family Farm Fest, which continues next week, too. 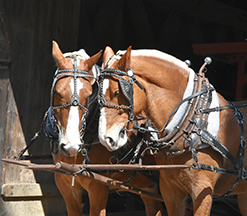 The large draft horses pulling a large wagon filled with passengers mug it up a little when the group stopped under the covered bridge at Old Sturbridge Village on 4/14/18. Photo by Beth David.

We got there around lunch time and were happy to find the Oliver Wight Tavern open, which sits just outside the village entrance. You’ll find wooden menus, an old-time look, crayons with a children’s menu, and a selection of alcoholic beverages, which are not available in the village. An instrumental version of “Oh My Darling, Clementine,” played softly in the background, setting up our mood for entry into the village.

I got the Kitchen Peppered Roast Beef ($11), dubbed a “19th century recipe adapted” (okay, it really said “receipt,” but we’re pretty sure that’s just a typo). My friend Tori got the Classic Onion Soup ($6) and a salad ($8). We both were very satisfied with our meals.

Our friendly waitperson suggested the Tavern Chips, which were a delightful discovery. I highly recom­mend them instead of fries.

Inside the village there were a host of demonstrations going on, all connected to farming life. Horse drawn wagon rides, sheep, working steers, musket firing demonstrations, visits with historical figures, and demonstrations on shoemaking, water powered machines (gristmill and sawmill), plowing (and a chance to try your hand at it), farm games, and much more started at 9:30 in the morning and carried through the day. Of course there’s a blacksmith shop, too, and a new exhibit on cabinet­making, 19th century style. 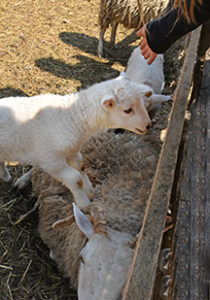 A lamb climbs on an older sheep to reach the hand of a young girl trying to pet it at Old Sturbridge Village on Saturday, 4/14. Photo courtesy of Tori Tepe.

We wandered around, mostly aimlessly, just taking in the sights, sounds and smells.

This is the beauty of the place, no pressure to join an exhibit. You feel totally free to wander around taking pictures, and just talking to the villagers, who are friendly and expound happily and proudly in their areas of expertise.

You’ll get a handy little map at the entrance that tells you all the activities of the day and how to find them.

We first ambled up to the barn with the “working steers,” and learned that “oxen,” are not a separate breed, but just working steers that are fully trained. Farmer Rob explained that “fixed” steers (neutered), as opposed to bulls, which are used for breeding, are trained to plow and pull the many things that need brute force on a farm. Once the young steers are fully trained, they are called oxen.

We moved on to the Water Power Tour, to learn how the rushing river can be used for mill grinding, wool carding and cutting wood. 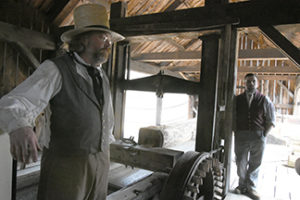 L-R: Miller Bob and Miller Ed explain how the water under the mill pushes the saw up and down using levers and wheels at Old Sturbridge Village on 4/14/18. Photos by Beth David.

Miller Dan explained how grist mill  operators were paid, and the idiosyncrasies of British tax law in 1830 that resulted in millers taking a portion of the grain they were milling in payment, and then trading it for other grains, instead of taking cash.

Oat was not considered human food, so it was not taxable, so people decided to eat it, he said.

Millers Dan and Ed showed how a saw gets pushed up and down by the water pushing levers, and how the big wheel pushes the log towards the saw. It was a noisy operation that pretty much worked on its own, once it got set up.

Indeed, the most startling part of the explanation, was when Miller Bob demonstrated how the sound changed when it would reach the end of the log, saying it was a difference he would hear as he walked around the village (in 1830 of course) or grabbed a brew at the pub.

The river water under the mill flows at 300 gallons a second, he said,  and would fill a swimming pool in 1 1/2 minutes. 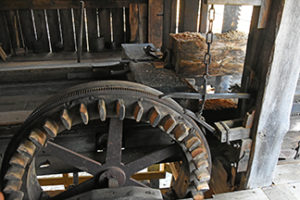 The simple mechanism pushes the wheel, which pushes the platform with the log towards the saw that is moving up and down. The top lever pushes the wheel a notch, the bottom lever stops the wheel from sliding back at the sawmill at Old Sturbridge Village on 4/14/18. Photo by Beth David.

Inside the mill, the noisy saw and clinking and clanking, made quick work of cutting a huge piece of pine. A lever diverts water to reverse the action, and a push of another lever creates a sharper angle to speed up the saw.

Other exhibits included old fire­arms, lighting, shoemaking, the secret life of bees revealed, two big bulls just hanging out looking majestic, a simple machines exhibit that was hands-on (wheelbarrow, lever, pulleys), and lots of other little treasures for young and old to find.

The early lighting exhibit included candle chandeliers favored by the rich, candleholders for the regular folk, and whale oil lamps, including some sketches of New Bedford,  acknowledging its important role lighting the world through whale oil.

The River Ride is not open until May, but that just means there is something to look forward to. The Quinebaug River (“long, slow-moving river” to Native Americans), winds through the property, which also has ponds and walking trails. 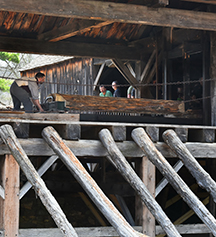 Miller Ed positions plate behind the big log at Old Sturbidge Village on 4/14/18. The whole platform moves to push the wood into the blade. Photo courtesy of Tori Tepe.

We also grabbed a sweet snack at the Bullard Cafe in the middle of the afternoon, which was kind of pricey, but a necessary sweet fix (sorry, I can’t find my receipt, I think it was around $6 for a cookie and a coke).

Inside the village, you’ll find Miner Grant Store and Bake Shop, a fun little place, jam-packed with all kinds of stuff you won’t find around here. Outside the village is the main gift shop, which has everything from period toys to salt water taffy and fudge, with an impressive sweets section, including more than 20 varieties of stick candy. It also has an healthy number of books to help you understand the time period.

Sometimes, though, the simplest exhibits are the ones that stick with visitors the most. The “Small House,” which is a sample of a house for “regular folk,” probably shows more about how people lived, with its simple, but warm decor, and its small bedroom and sturdy furniture, than any other exhibit.

Ten-year-old William lives within a half-hour of OSV, so he has been several times. He said his favorite activities on this day were the coach ride and the oxen.

“Because it’s fun,” he said of the horse-drawn carriage.

Other children in the village said they liked watch­ing the shoe­maker and the baby sheep.

At the gift shop, cashier Lindsie read the story of the grasshopper to an observant youngster who noticed that it was the village’s symbol.

The grasshopper was chosen because it literally springs from the earth, where its eggs were laid. It also has attributes of fertility, immortality, courage, and song, but its widest meaning was “native.”

This is still a good family visit, and if you plan on going even just twice, the new pricing makes getting a season pass a real deal.