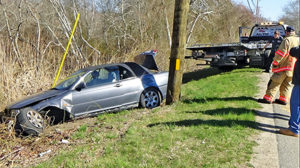 A tow truck gets ready to pull out a 2001 BMW 325 that left the road, sideswiped a telephone pole and ended up in the trees on Sconticut Neck Road in Fairhaven on Friday, 4/22/22, a little after 3 p.m. Photos courtesy of M.L. Baron.

Two car crashes in Fairhaven on Friday, 4/22, sent several people to the hospital.

Police received a call at 3:19 p.m. about an accident on Sconticut Neck Road involving one vehicle. Fairhaven Police spokesperson Lt. Kevin Kobza said a gray 2001 BMW 325 left the road when the driver lost control of the vehicle. Theresa Cournoyer, 68, of Acushnet, told police the car was pulling to the right and the car did not respond when she tried to steer. The vehicle also did not respond when she tried to break, she said.

Two passengers were in the car. One person was transported to the hospital with minor injuries.

The telephone pole had some damage to the base and Eversource was notified.

Also on Friday, around 8 p.m., a 2011 Chrysler Town and Country van with four occupants, including the driver, jumped the curb and sidewalk and collided with a utility pole on Route 6 eastbound, near the intersection of Alden Road.

The vehicle was traveling east­bound on Route 6 and spun around, ending up facing south. The driver, Maria Carreiro, 75, of New Bedford, and all three passengers were transported to the hospital with unspecified injuries.