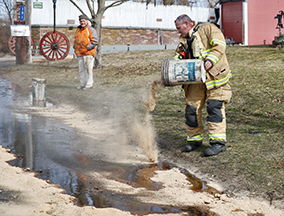 Fairhaven Firefighters were called to the scene of an oil spill on a busy roadway Wednesday afternoon, 3/28.

When crews arrived at 191 Bridge Street they found that the occupant had been transferring cooking oil, that he uses to fuel his vehicle, from a 200-gallon tank to smaller five-gallon buckets.

During the transfer approximately 50 to 75 gallons of cooking oil spilled down the driveway and onto Bridge Street. Being a busy roadway, traffic spread the oil along Bridge Street from Route 6 to Alden Rd causing a slippery mess.

Fairhaven public workds trucks were called to spread sand on the roadway as Fairhaven Police closed that portion of Bridge Street for several hours.

Frank Corp., a private clean-up contractor of New Bedford, was called in to handle the clean-up of the road­way. The State Office of Environ­mental Protection had a repre­sentative on scene as well to monitor the situation.

The property at 191 Bridge Street is owned by Armand Pinard. 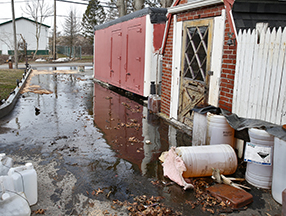 Cooking oil spills and rolls down to Bridge Street from this driveway when the homeowner was transferring the oil, which he uses to fuel his vehicle, to a smaller container on Wednesday, 3/28. Fairhaven Fire Department photo by Ed Pepin. 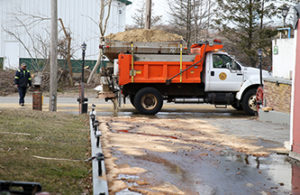 A Fairhaven public works truck sands down Bridge Street after cooking oil spilled onto the roadway when a homeowner was transferring the oil, which he uses to fuel his vehicle, to a smaller container in the driveway. Bridge Street was partially shut down for several hours on Wednesday, 3/28, due to the spill. Fairhaven Fire Department photo by Ed Pepin.