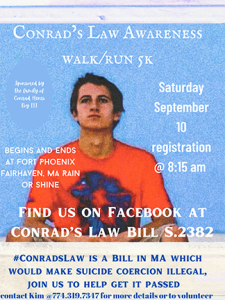 The family of Conrad Roy III is hosting an awareness/memorial walk/ run 5k on Saturday September 10. The event will begin and end at Fort Phoenix State Reservation in Fairhaven, MA beginning at 9am, registration at 8:15am.

The purpose of this event is to raise awareness and gain support for “Conrad’s Law” which would make coercing suicide illegal in Mass.

The story of Conrad’s suicide in 2014 and his ‘friend’s’ subsequent involvement and conviction has sparked nationwide attention being an unprecedented case that had never been tried before given the nature of the circumstances. The biggest obstacle faced by prosecutors was the fact that, although being illegal in 43 other states, suicide coercion is NOT illegal in the state of MA. In 2019 a Bill was proposed by State Senator Barry Finegold through the encouragement of Conrad’s mother Lynn that carries her son’s name and would in fact make suicide coersion illegal and potentially avoid a tragedy of this magnitude from happening to another family. The family of Conrad remained silent during the long 2.5 years of hearings, the trial, and appeals. Since the conviction there have been multiple shows, interviews, documentaries, a docu series, and a movie made, the latter without family consent. This family will never truly heal but the passage of this law would make this young man’s death not be in vain, that maybe in his story could save another’s life.