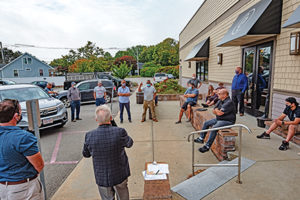 Dennis Arsenault makes a bid on the liquor license at the former location of Cleary’s Pub in Fairhaven, which sold for $27,000 to building owners Cathy and Ken Melanson. Photo by Glenn C. Silva.

It’s one of those things that’s good and not-so-good at the same time. The liquor license that formerly belonged to Cleary’s Pub, owned by Andrew “Drew” Tillett, was re-acquired by Cathy and Ken Melanson, who owned the license when it was at EJ’s pub, the same building that Cleary’s was in. The Melansons still own the building, and are planning to rent it out to Minh Tieu, who will open Travelers Alehouse at the location.

Ms. Melanson said she was “happy to get it back,” meaning the liquor license; but not so happy that she had to pay for her own license, to the tune of $27,000.

The auction was held last Tuesday,  9/29, at the location on Huttleston Avenue in Fairhaven. Ms. Melanson said that Mr. Tillett left behind a slew of unpaid bills and taxes that tied up the liquor license and almost led to her losing it.

She said she will “pledge” the license to Mr. Tieu, but this time with many safeguards in place, so there will not be a repeat of the last time.

Cleary’s closed suddenly the first week in November of last year, and the site has been empty since then.

Ms. Melan­son said the next steps include registering the change with the town and the state. She hopes the new business will be up and running sometime in November.

She said Mr. Tieu has taken advantage of the time he had by working at the site. He worked at Cleary’s Pub in a variety of capacities, including manager and head chef.